This post is a reflection on what I learned while creating the Brothers iPad app. To download the app or see a gallery of images, visit samoldenburg.com/brothers. 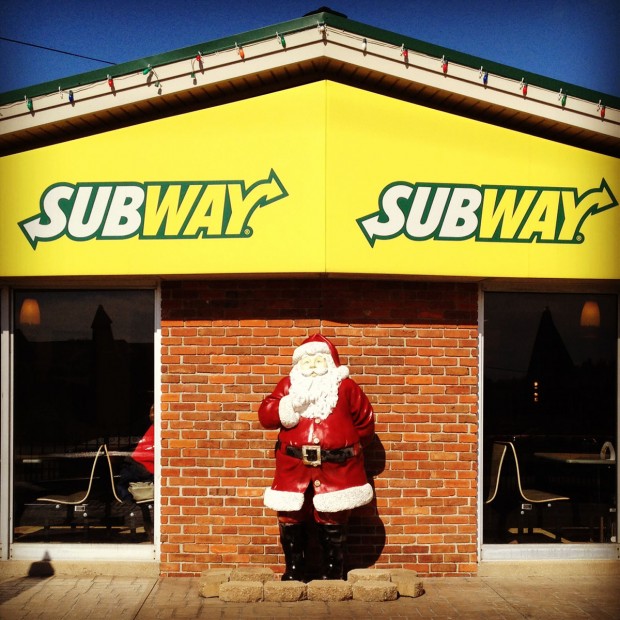 February 11
“Lunchtime pit stop in Santa Claus, Ind.”
I stopped for lunch about 15 miles from Saint Meinrad before my first meeting with Br. John Mark and Mary Jeanne. In this post, I’m using pictures taken on my iPhone and edited in Instagram while working on the project to give a behind-the-scenes feel. 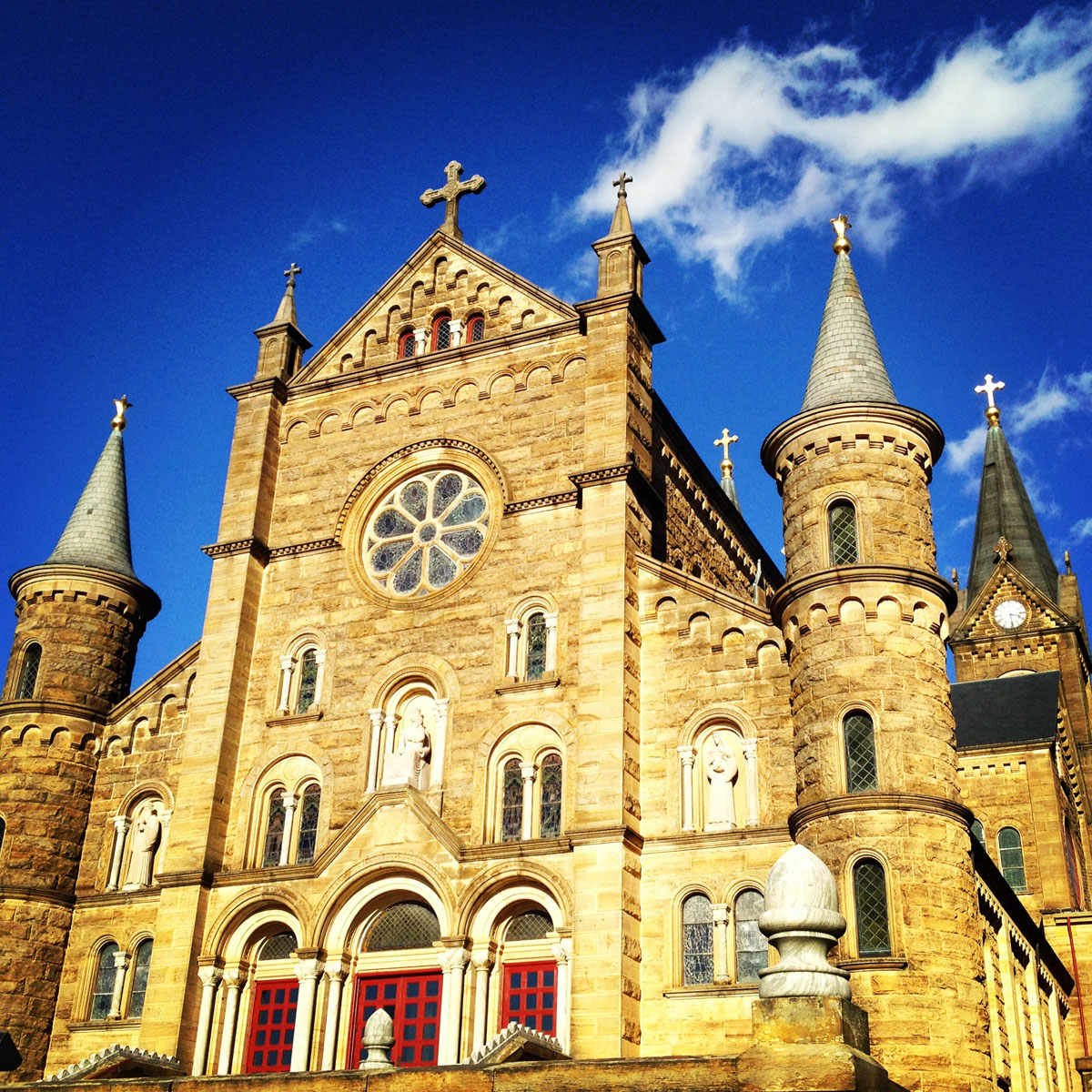 February 11:
“Afternoon of meetings to start my last story while at WKU.”
I was both hopeful and nervous as I left Saint Meinrad after my first visit.

February 23
“Found a cloud factory today”
This is on the outskirts of Owensboro, Ky., about halfway between Bowling Green and Saint Meinrad, which is a two-hour drive.

March 14
The outside of the church after saying compline, or night prayer, with the monks on the first night of my first multi-day visit. 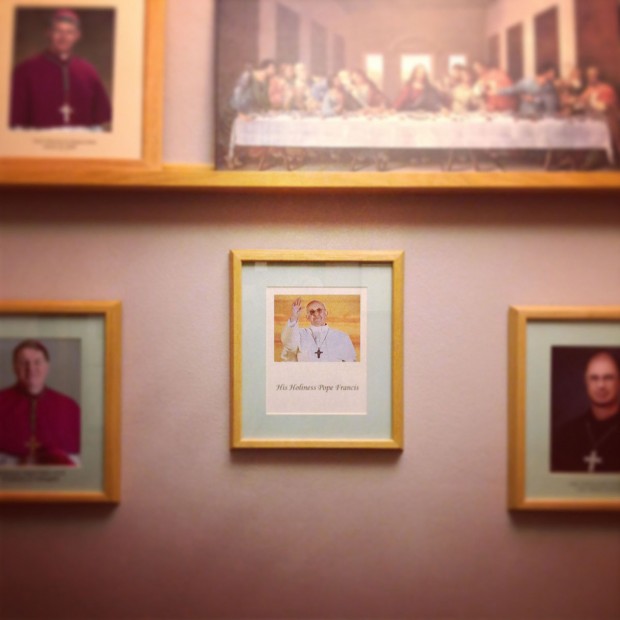 March 14
“Pope Francis is already hanging on the wall.”
This picture was hanging in a hall in the seminary one day after Jorge Mario Bergoglio became Pope Francis. 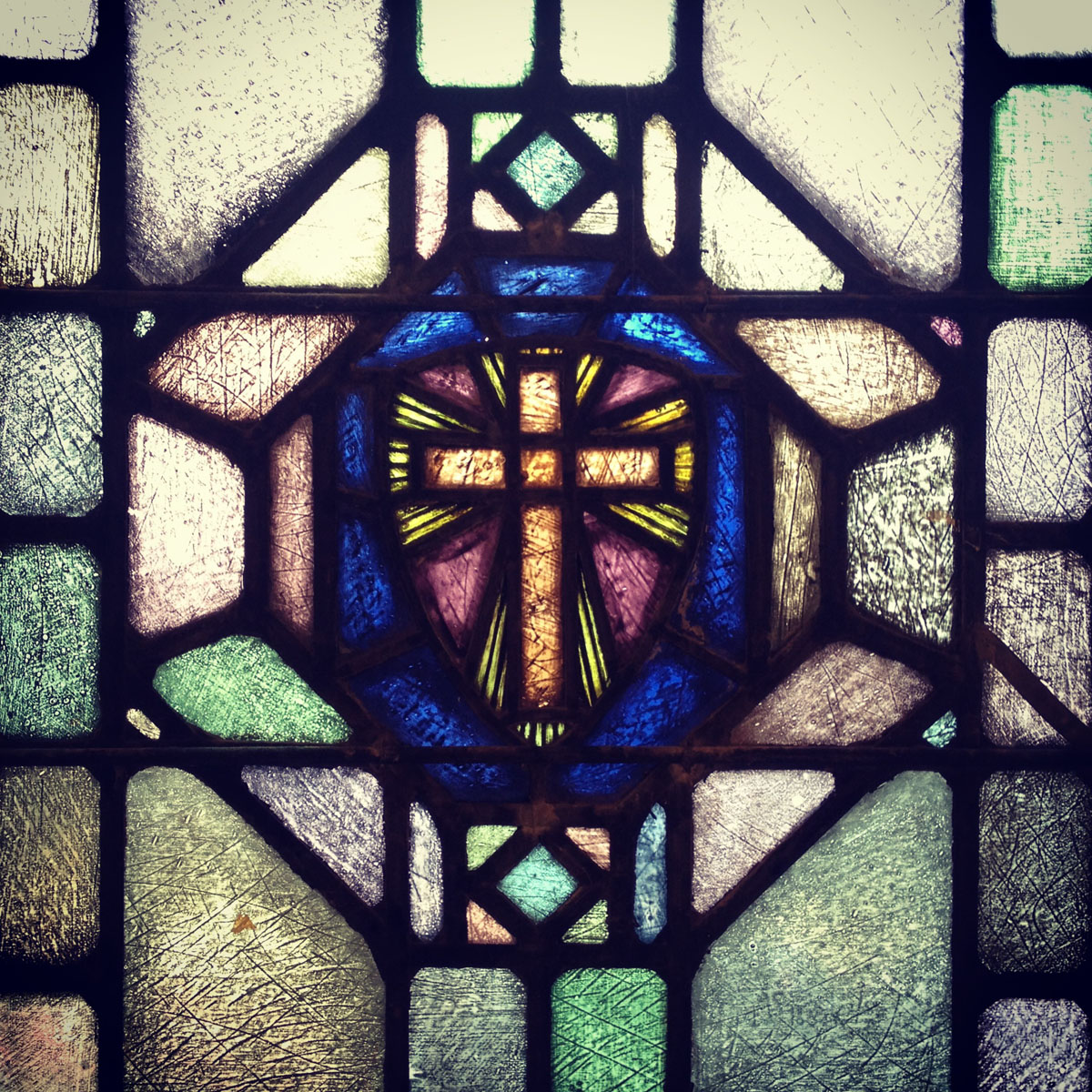 March 18
Stained glass in a stairwell in the seminary 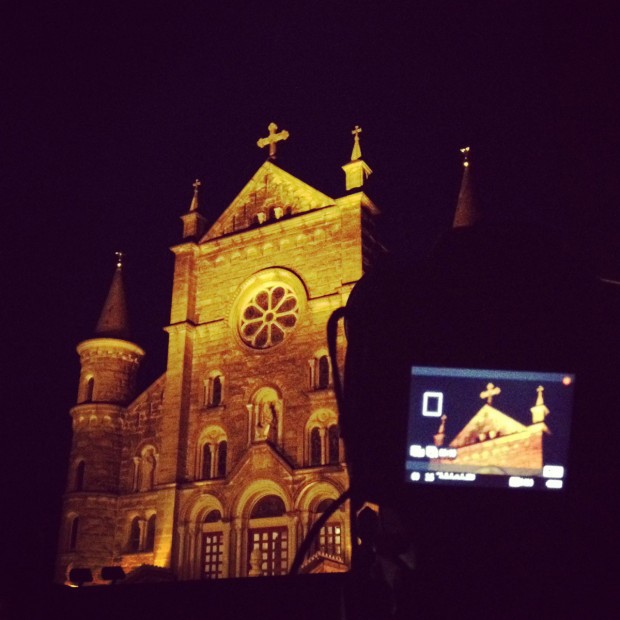 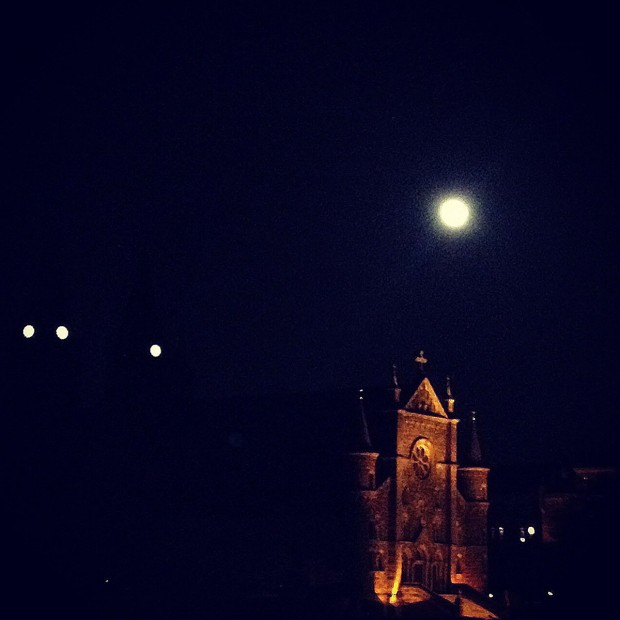 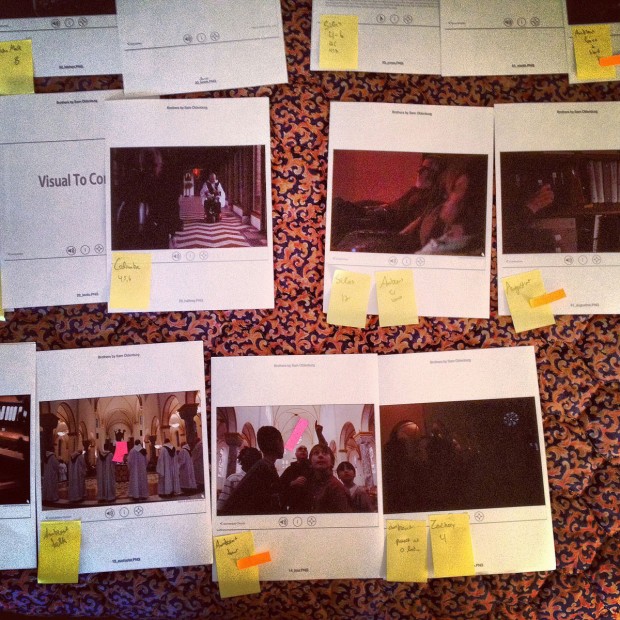 April 27
“Edit, edit, shoot, edit, edit, shoot”
During my last visit, I spent time editing between shoots to be sure I had everything I needed. Spread out on the extra bed in my room in the Guest House and Retreat Center, these printouts of the mini-story pages helped me keep track of what I was done with. 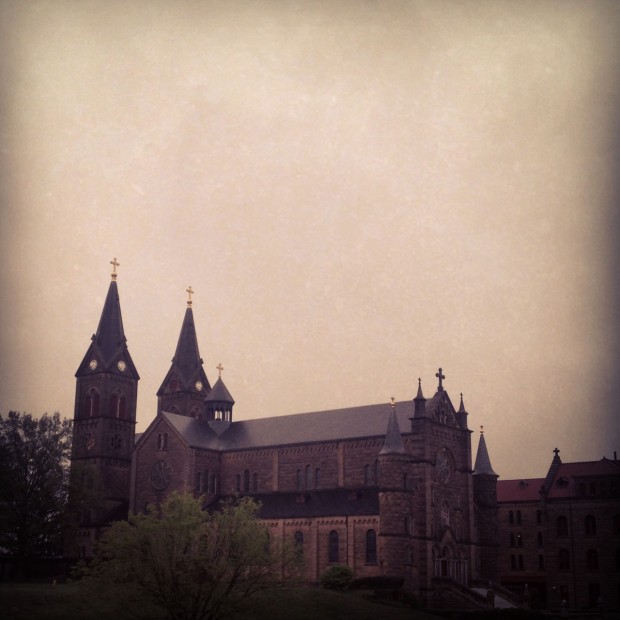 April 27
“Only two more days of shooting for my last story at WKU.” 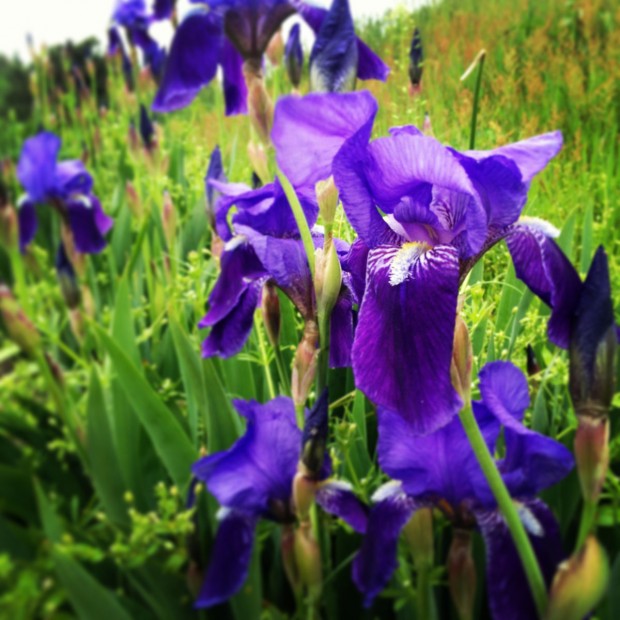 April 28
I found these flowers while taking a walk after dinner. 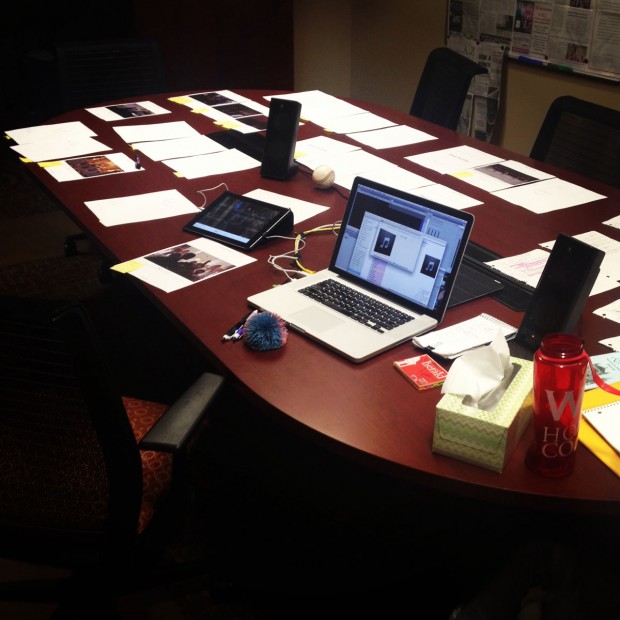 May 5
The weekend before the project was due for class, I took over the conference room in the Student Publications building where I had plenty of room to spread out everything I used to edit the project and track what I had left to do. 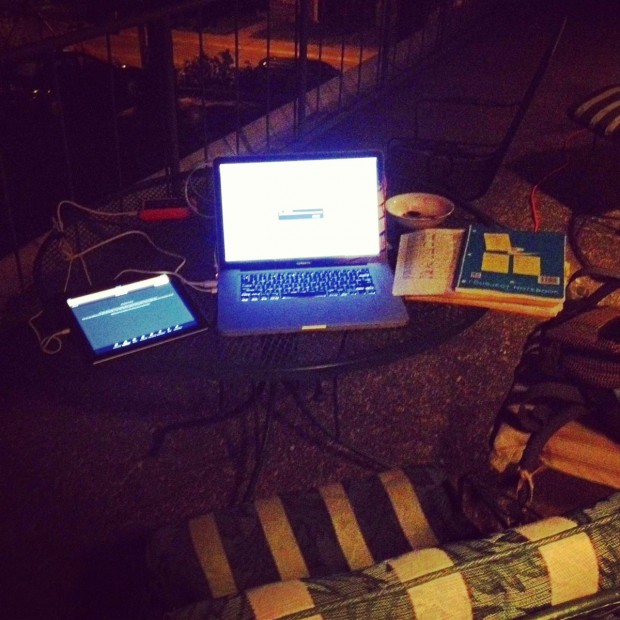 May 8
The night before the project was due for class, I was ironing out glitches and eating ice cream on the porch outside my apartment. 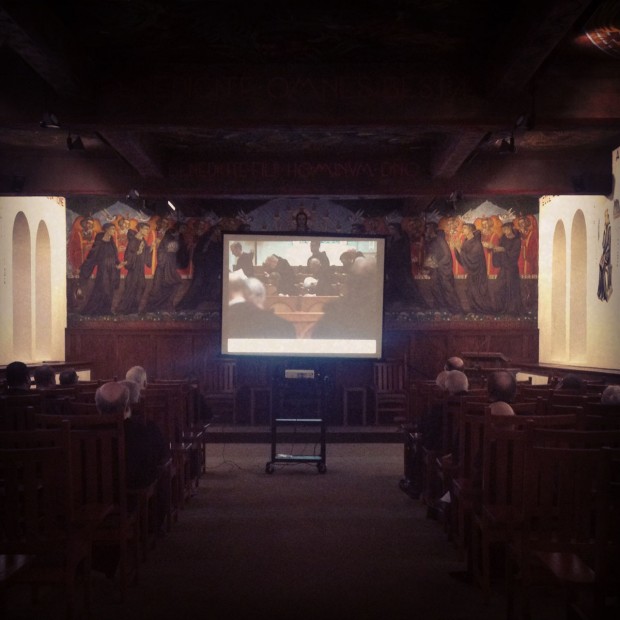 May 30
“Enjoyed sharing my iPad app with the monks tonight! Check it out for yourself at samoldenburg.com/brothers”

The first night I ate dinner with the community of monks at Saint Meinrad, I picked up a prayer card from the guest table to pray with the rest of the men. “May the example of our fraternal charity and our good zeal draw many others to join us in the monastic way of life.” I mumbled those last few words— “Join us in the monastic way of life”— how could I say that? I’m not a monk. I’m many things— a photojournalist, a student, a Catholic— but monk is nowhere on that list.

For my last photo class in my last semester at Western Kentucky University, I had the opportunity to spend the whole semester on just one project, a project of my own choosing. I had no idea what I wanted the project to look like, what all I wanted it to contain, or exactly how I would go about completing it. Nonetheless, in February, I got the ball rolling.

I decided pretty quickly that I wanted to do a story about the community of monks at Saint Meinrad Archabbey in southwestern Indiana. Despite having been Catholic all my life, the life of monks was somewhat of a mystery to me, so I was curious to know more. I had briefly met Br. John Mark, the monastery’s vocation director, a few months earlier while I was volunteering at a youth conference, so I reached out to him. Through several meetings with Br. John Mark and Mary Jeanne, the archabbey’s communications director, as well as a letter to the abbot, who is kind of the head monk in a monastery, I explained what I wanted to do. Although, I really didn’t have any idea what I wanted to do. Here’s part of the letter I wrote to the abbot:

“I propose a photo story exploring the intergenerational community of the monastery at St. Meinrad Archabbey. By spending time with the Benedictine monks of St. Meinrad, I hope to see how monks of various age groups differ, as well as how the community interacts as a whole. I will then, through the use of still photographs and audio, share what I discover with others.”

Pretty vague, right? Nonetheless, the abbot approved my request. That led to a meeting with Br. John Mark to talk about logistics, which was followed by that first dinner in the monastery. I planned three visits, each four to five days, in order to photograph the goings-on of the community, as well as record ambient audio and interviews.

By the end of that first extended visit, I was no longer mumbling through the dinner prayer. By talking with many monks and seeing their lives as an example, I learned that you don’t have to be a monk to live the monastic way of life. Rather, as I perceive it, living the monastic way of life, means offering up all that we do in prayer. As Christians, we’re called to pray always. One of the Gospel readings that I think touches on this is coming up this Sunday, “Be sure of this: if the master of the house had known the hour when the thief was coming, he would not have let his house be broken into. You also must be prepared, for at an hour you do not expect, the Son of Man will come.” (Luke 12:39-40)

But if we’re to pray always, that can’t mean sitting around reciting the “Hail Mary” all day, every day. That just isn’t practical. Instead, we have to utilize as many different forms of prayer as we can get our hands on. Therefore, we must offer up everything in prayer— be it the way we pray, the way we work, the way we relate to others, or the way we spend our time— in order to glorify the goodness of God. I’ll be the first to admit, I certainly haven’t figured out how to do that 24/7/365, and I don’t think any of the monks I met at Saint Meinrad have it perfected either. That’s what the monastic way of life is— striving and struggling toward a life in which we pray always. Surely we don’t have to be monks to do that. That, I realized, is what I wanted people to discover through my project— that monks don’t simply sit in church and pray all day. Their life is prayer, and that’s a life we can all emulate.

By the time I was back at Saint Meinrad for my second visit, I had decided that I would present my photo project as an iPad app. I had some experience working with app design already from developing the Talisman app ), but I soon realized that this app would be much different. I decided upon a sort of “choose your own adventure” approach for Brothers (the name I came up with for the app). By that, I mean that the project is made up of a lot of mini-stories which the reader can navigate to by moving through different rooms in the Archabbey. When I made my second visit, I was starting to get a feel for how the app’s navigation should come together, but that changed quite a bit over the few days I was at Saint Meinrad. I learned that when it comes to designing something based on a space, nothing beats actually being in the space when you’re brainstorming. I found a way to use more pictures as part of the navigation by incorporating panoramic images of some of the main spaces in the Archabbey, and I learned a really simple way to make panoramic pictures by using the photomerge tool in Photoshop.

The app was coming together pretty well by my third and final visit. I had a stack of printouts with screenshots of all the mini-stories, which helped me keep track of what was done and what was still left to capture and edit. Those printouts proved very helpful in keeping me organized over the next few weeks as I finished production. During the last visit I even got to spend some time sort of feature hunting for images to go in the introduction, which was fun to do, rather than just shooting pictures that fit into the stories.

After that visit, I had only about a week left until the project was due in class, so that meant a lot of late nights and long days wrapping up production while working on all of the other end-of-semester tasks too. With the project due on Wednesday morning, I had my last critique session with classmates on Sunday afternoon. Their advice was invaluable in helping me to iron out some issues with the navigation.

The night before the project was due, I was still troubleshooting the app as it kept crashing mid-use. I found out that it had too much content for the app to handle, and I had to get rid of a few pictures in some of the stories.

The next day we all presented our projects to a professional advisory panel. It was a really fun day celebrating the culmination of everyone’s work. The panel brought up a question that had been brought up throughout the semester, and that I often ask myself when working on anything- “Who’s your target audience?” But with this story, I didn’t really know the answer. That is, until recently. In some regards, I am the target audience. I got to work on a story that I cared about, and that’s pretty great. I believe that that care is a key ingredient in creating a project worth looking at. As journalists, we occasionally get caught up in trying to produce content that appeals to everyone and their mother. But, really, not every story has to appeal to every person. We have to remember to seek out stories that we care about, that we can pour our heart and soul into, because someone else will care about those stories.

I got to see that care firsthand when I went back to the monastery to share the Brothers app with the monks. I’d never before gotten to sit in a room full of people, about whom I produced a big story, while they looked at the story. That was an awesome experience! There were as thankful for what I provided them with as I was for being allowed into their lives.

More people have shown they care about the story since that night. After being available for about two months, the app has over 300 downloads. According to my analytics, the majority of users are using the app more than once and for somewhat lengthy periods of time. To go through all of the content in the app takes about 30 minutes, but I designed it so that users can get a good feel for living the monastic way of life in much less time too. I’m excited to see how the app continues to be received as there are news stories in the works, and Br. John Mark is planning to share it at a national Catholic youth conference in the coming months.

Embarking on a project much different from anything else I had ever worked on was a great experience. Throughout the time I spent on this project, I practiced many skills and developed new ones. But ultimately, I learned that of all the skills in my tool belt, love is the most important skill. And that’s a skill I can practice every day.