My first summer at The Center for Gifted Studies was a busy one — we had over 1,000 students and teachers came to campus for our five different programs this summer. Here are some of my favorite photos from those jam-packed five weeks. 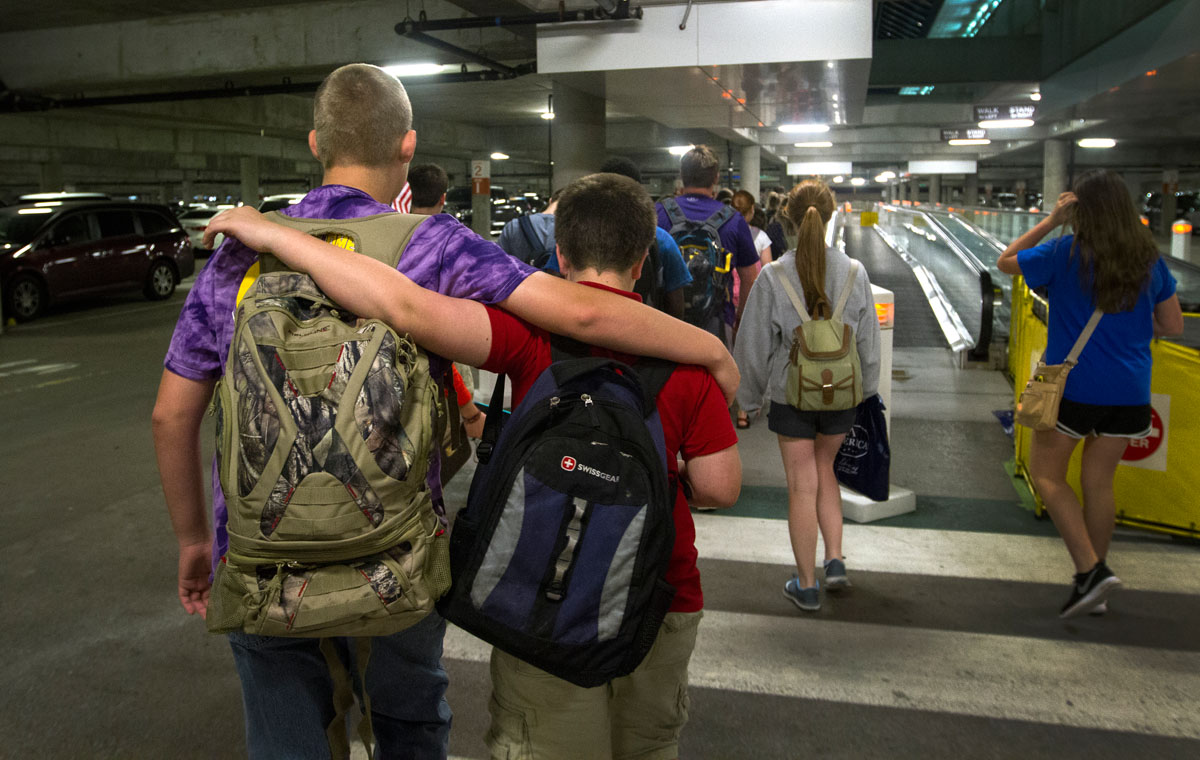 Tyler Thomas (left) of Bowling Green and Scott Tobe of Louisville walk through a parking garage at the Nashville International Airport after returning from a day-long field trip to Washington D.C. Tuesday, June 30. (Photo by Sam Oldenburg) 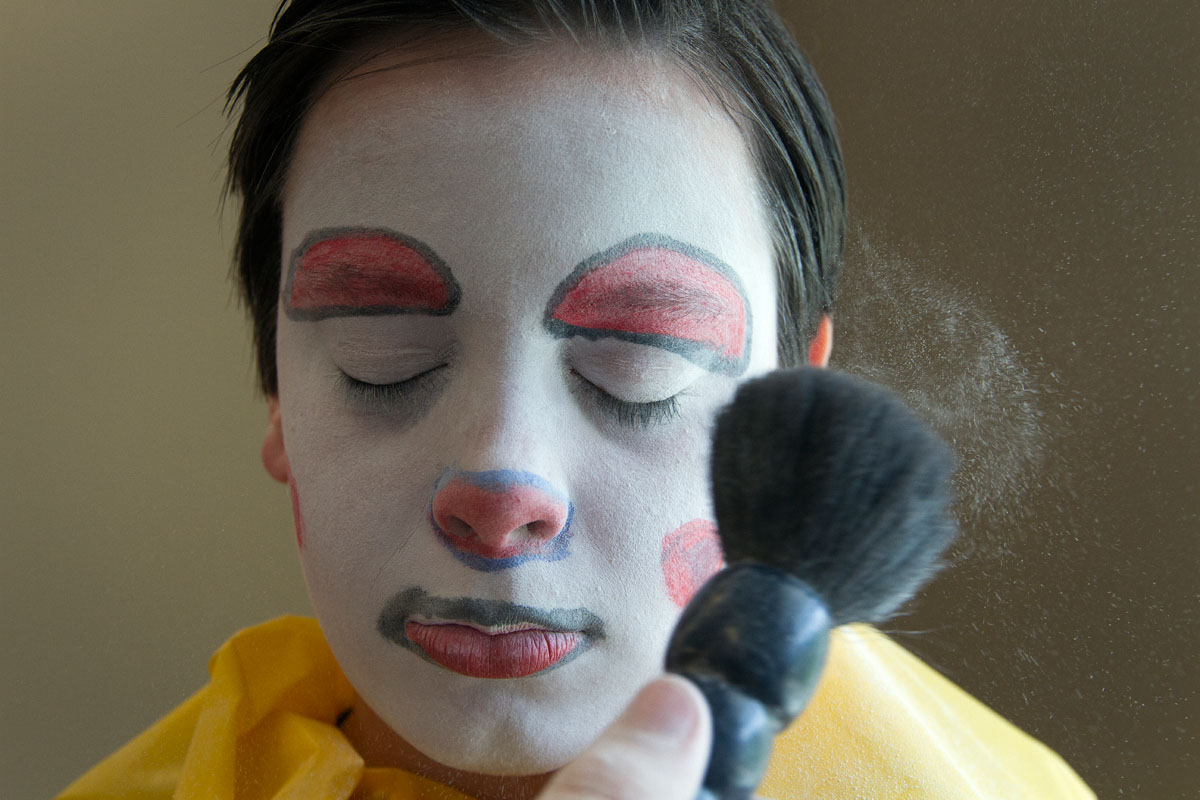 Matthew Chapman of Fort Campbell closes his eyes while a classmate brushes baby powder over his makeup during Clowning Wednesday, June 17. (Photo by Sam Oldenburg) 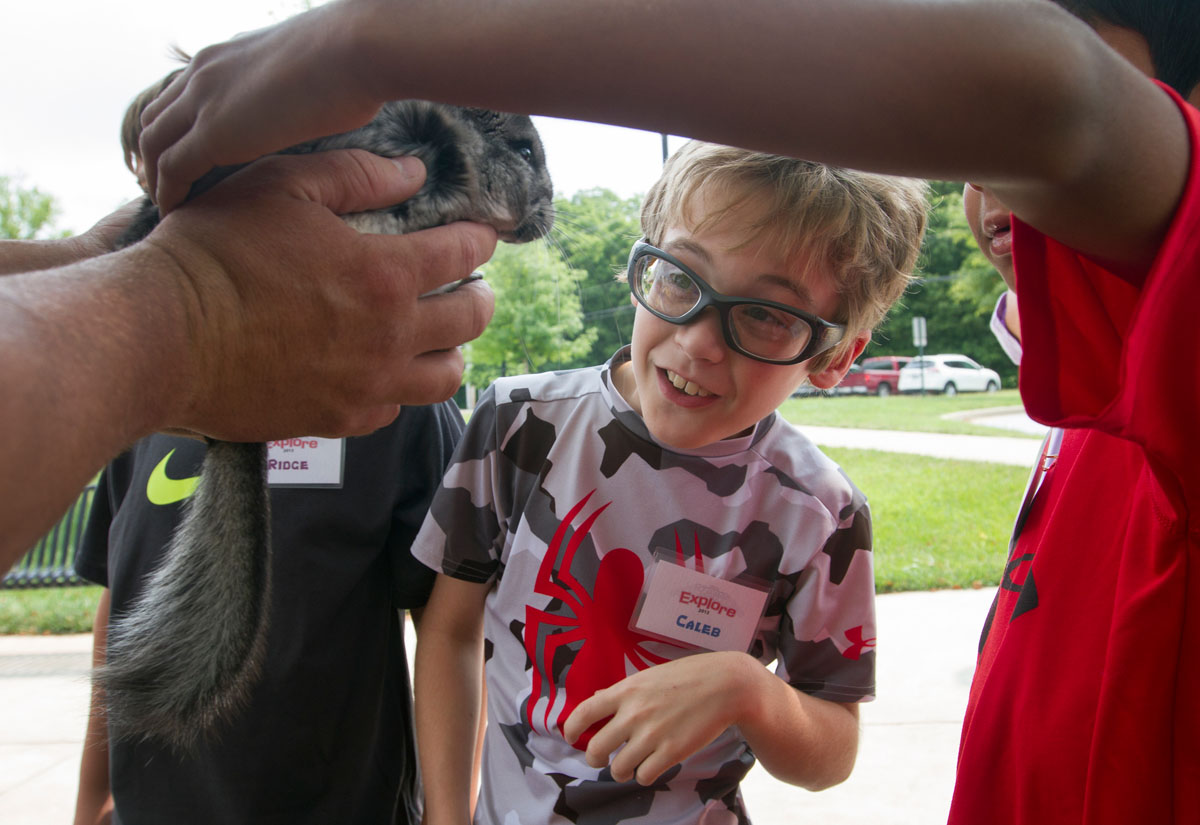 Caleb watches a chinchilla as a fellow camper pets it during a presentation from Zoodles during Camp Explore Monday, July 6. 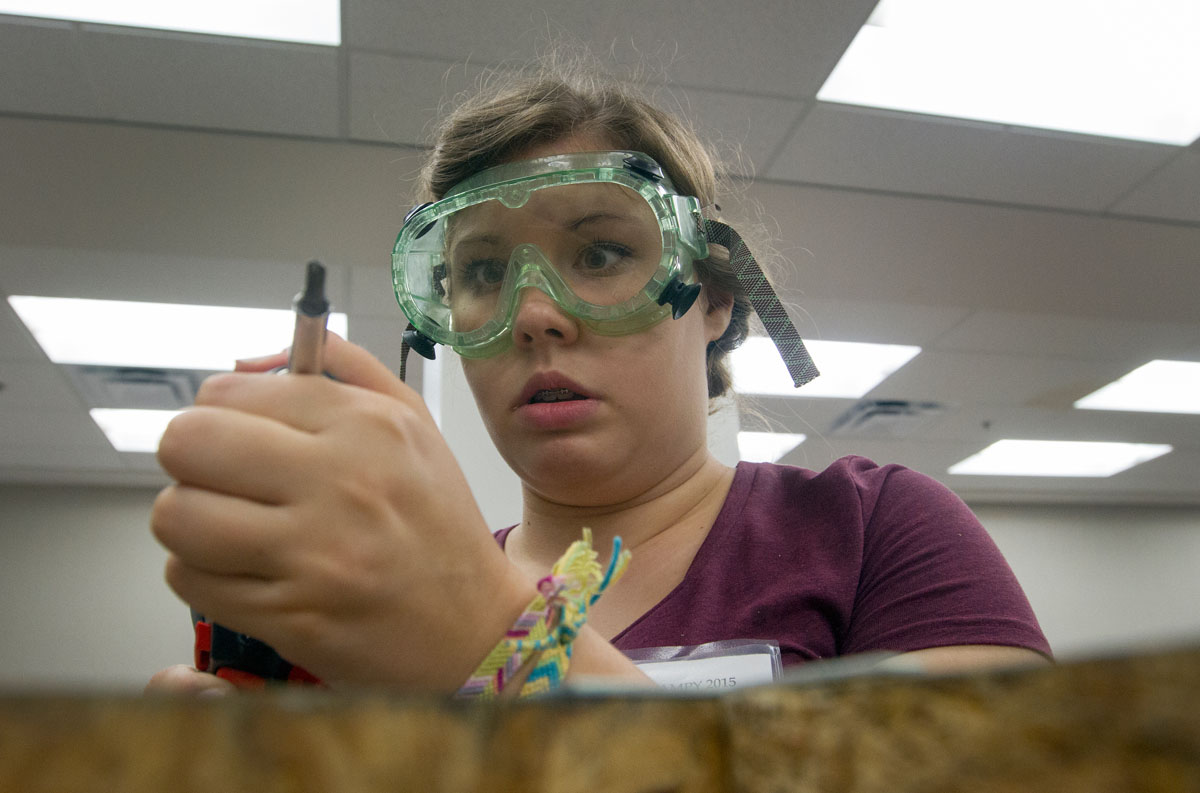 VAMPY camper Olivia Gilliam of Madisonville inspects her screwdriver before attaching two boards to be used for a Rube Goldberg machine in the STEAM Labs class July 3, 2015, in Snell Hall. The finished machine used a complicated series of tasks to complete a simple task. 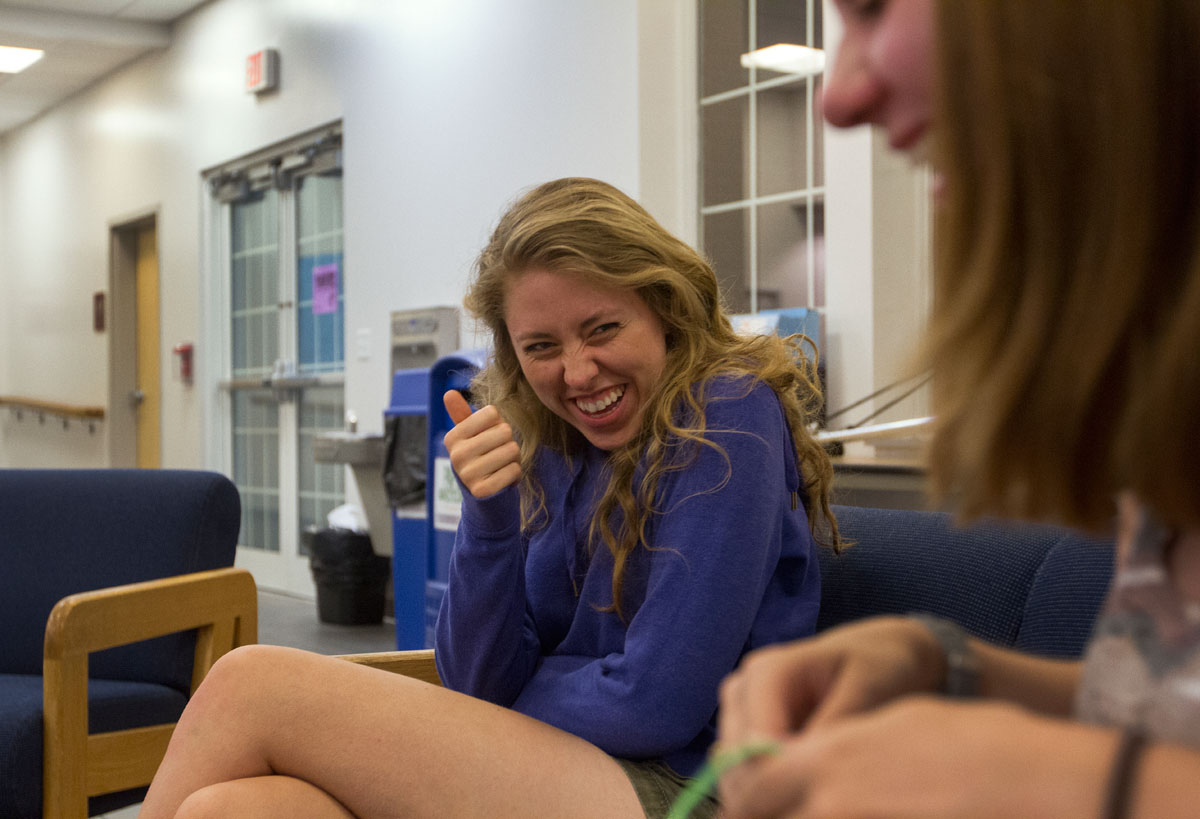 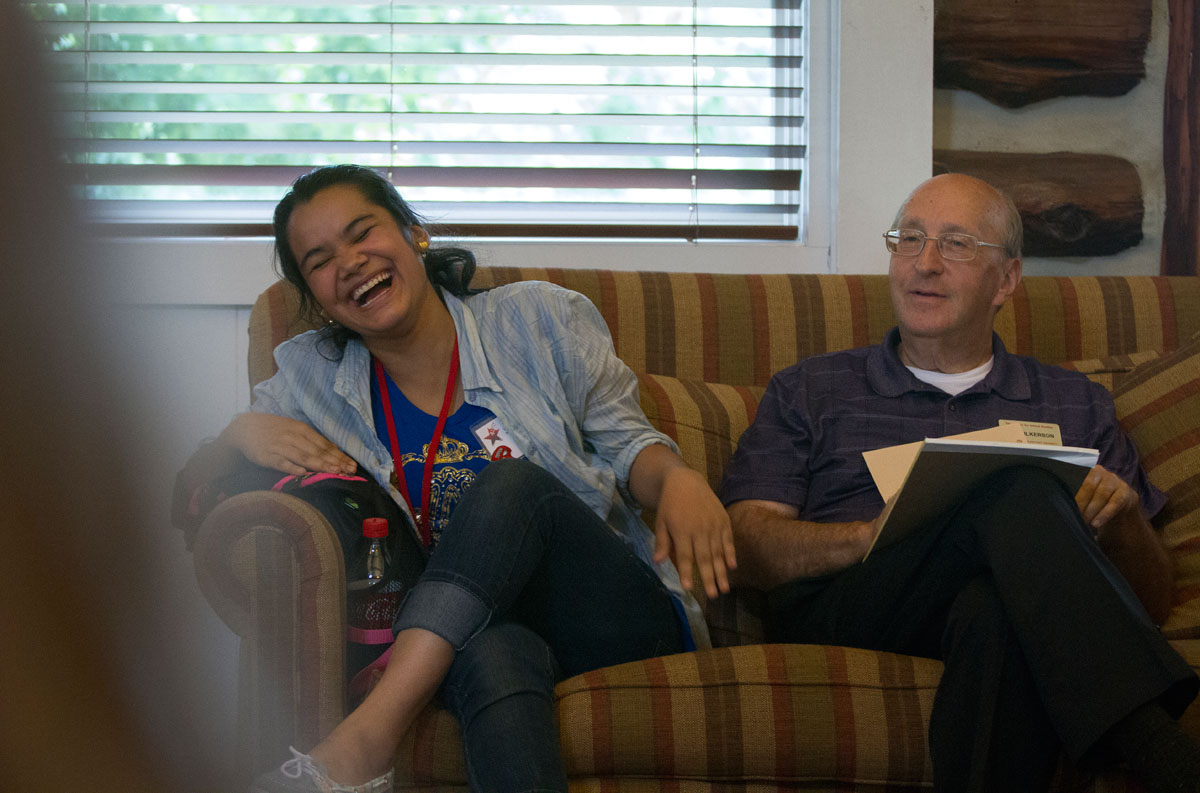 Rose Mar (left) of Bowling Green laughs while Jim Fulkerson leads his Musical Troupe class in activities to get to know each other on the first day of SCATS classes June 8 in the Faculty House. Jim has been teaching SCATS classes for 27 years. 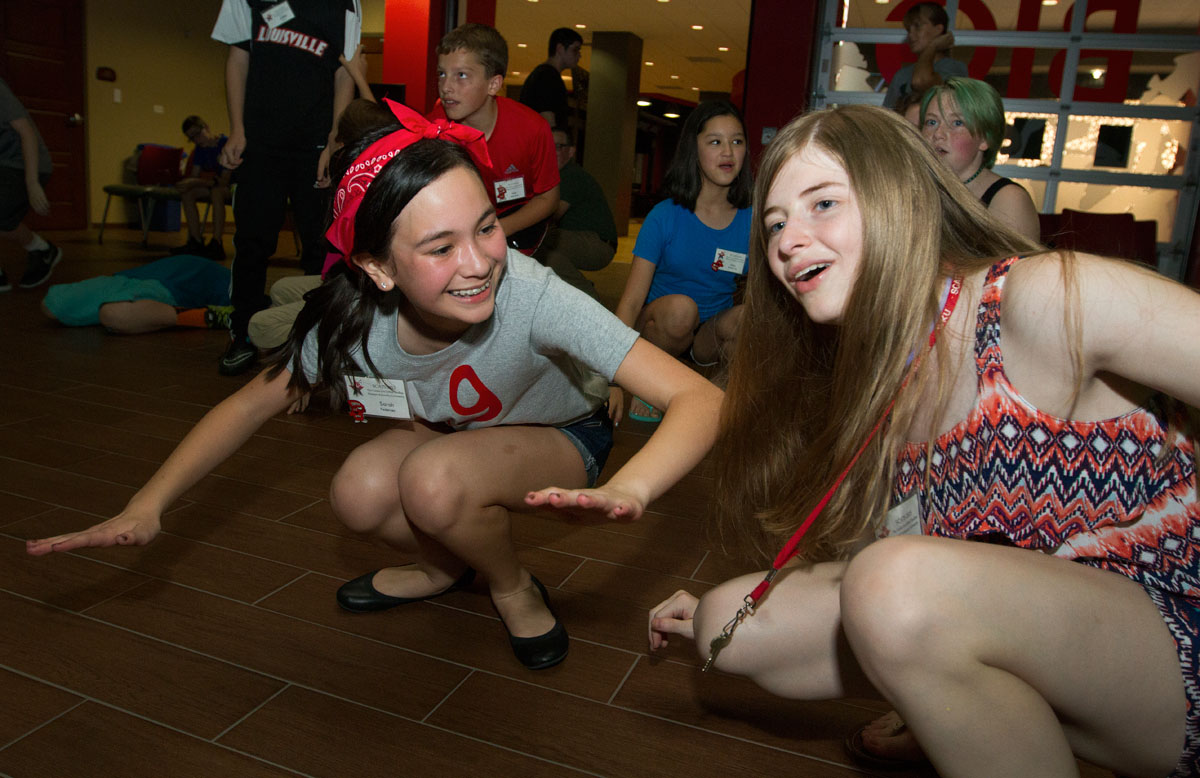 VAMPY campers look at Saturn and a variety of star formations through telescopes during a stargazing party July 6, 2015 at Western Kentucky University. Astronomy students helped position the telescopes for other students to use. 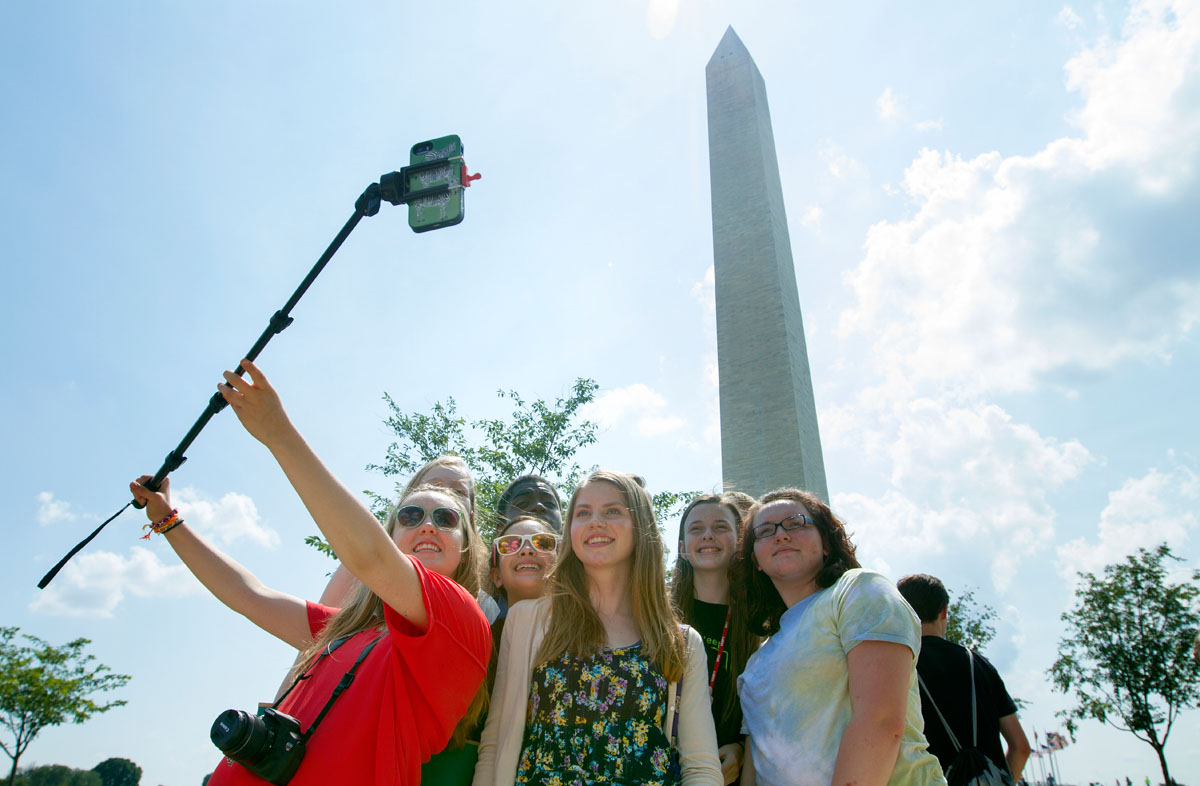 Pop Culture students take a selfie in front of the Washington Monument during a field trip to Washington D.C. Tuesday, June 30. 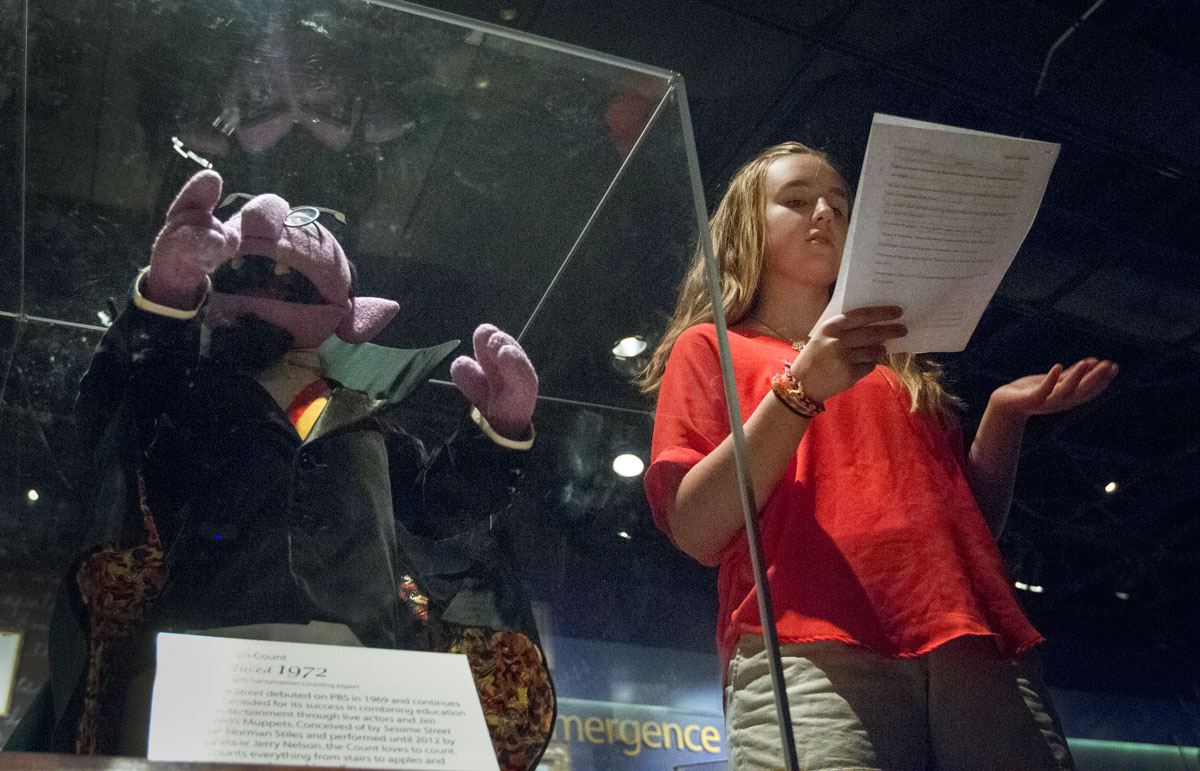 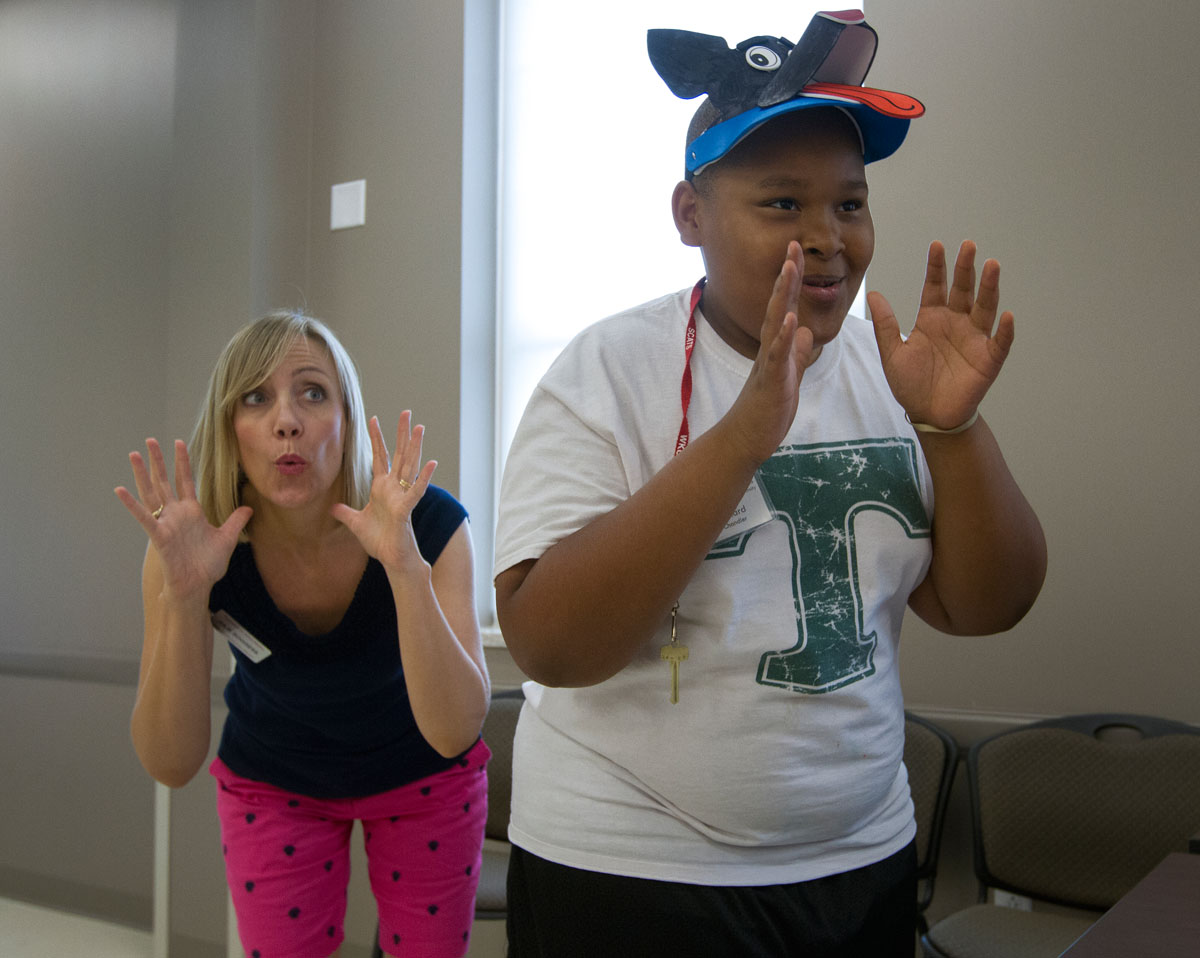 Acting teacher Julie Boggess coaches Richard Chandler of Louisville on how the Big, Bad Wolf would blow a house down while the class rehearses “Fairy Tale News” Tuesday, June 16. 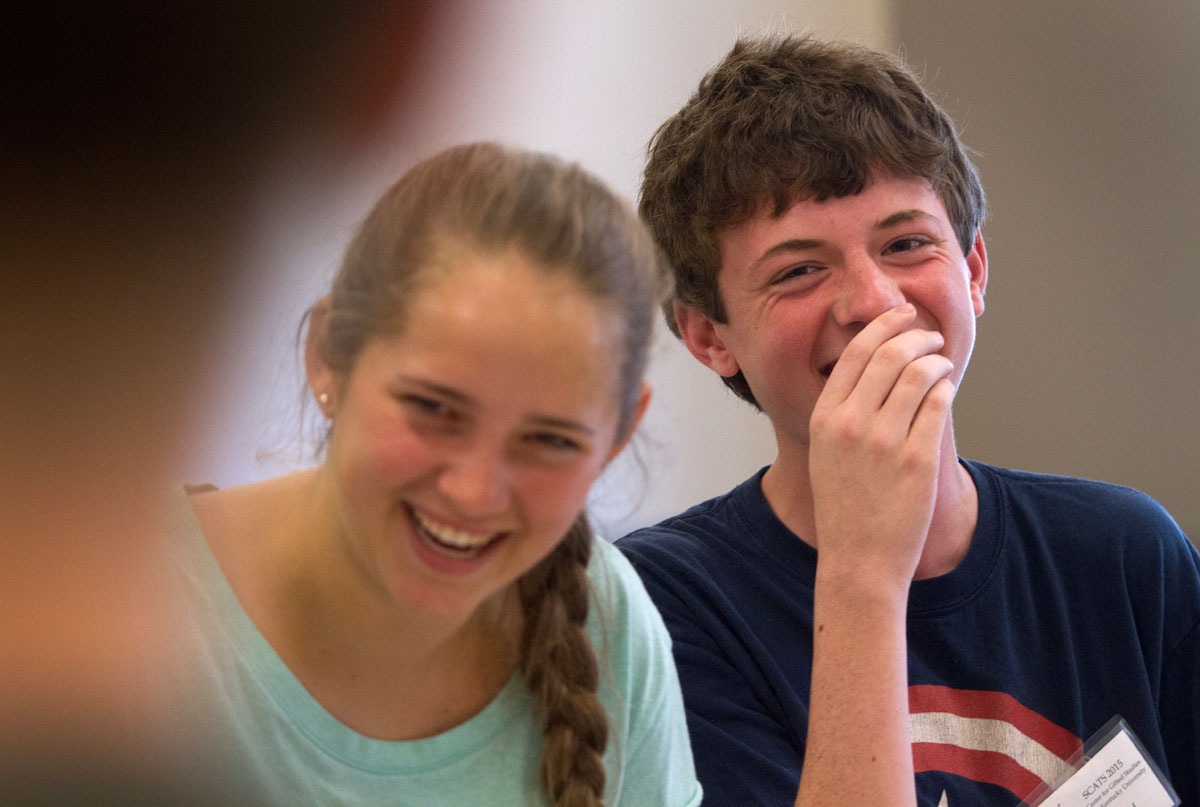 Mary Baker of Paducah and Jared Rodgers of Verona laugh after Jared flubbed a line while rehearsing for “12 Angry Pigs,” a parody of “12 Angry Men” June 11 in Acting class June 10. 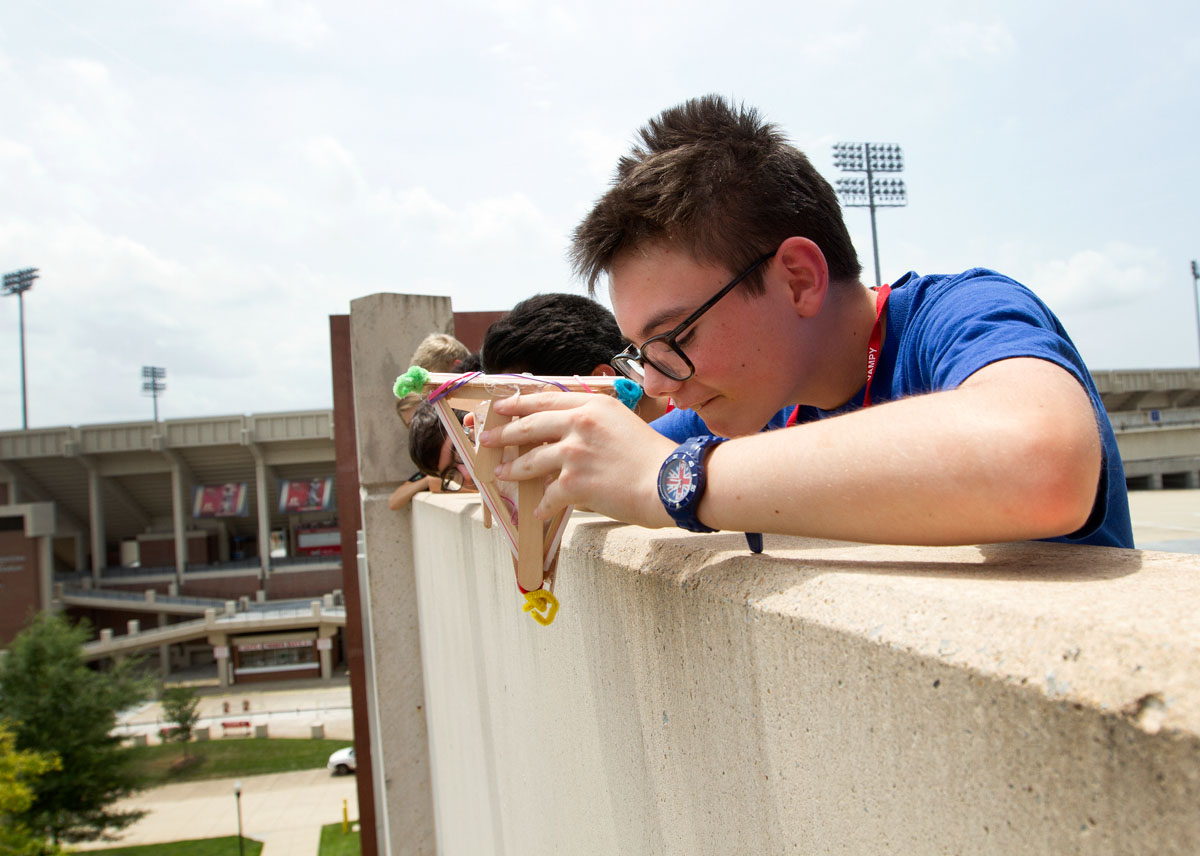 Lorenzo Mahoney of Prospect aims his egg drop container before letting it go from atop Parking Structure 2 Tuesday, June 23, during Problems You Have Never Solved Before. 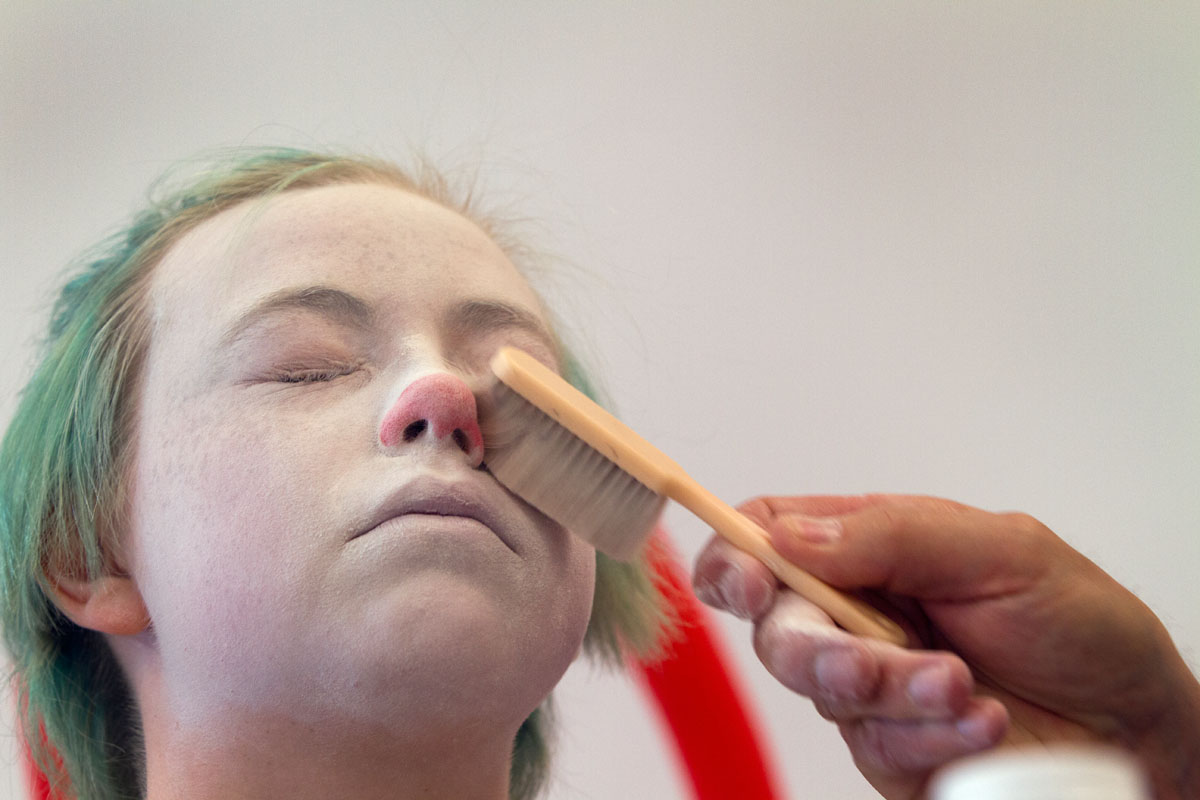 Evvie Cooley of Louisville keeps her eyes shut as her teacher, Nick Wilkins, brushes powder on her makeup during Clowning class June 10. 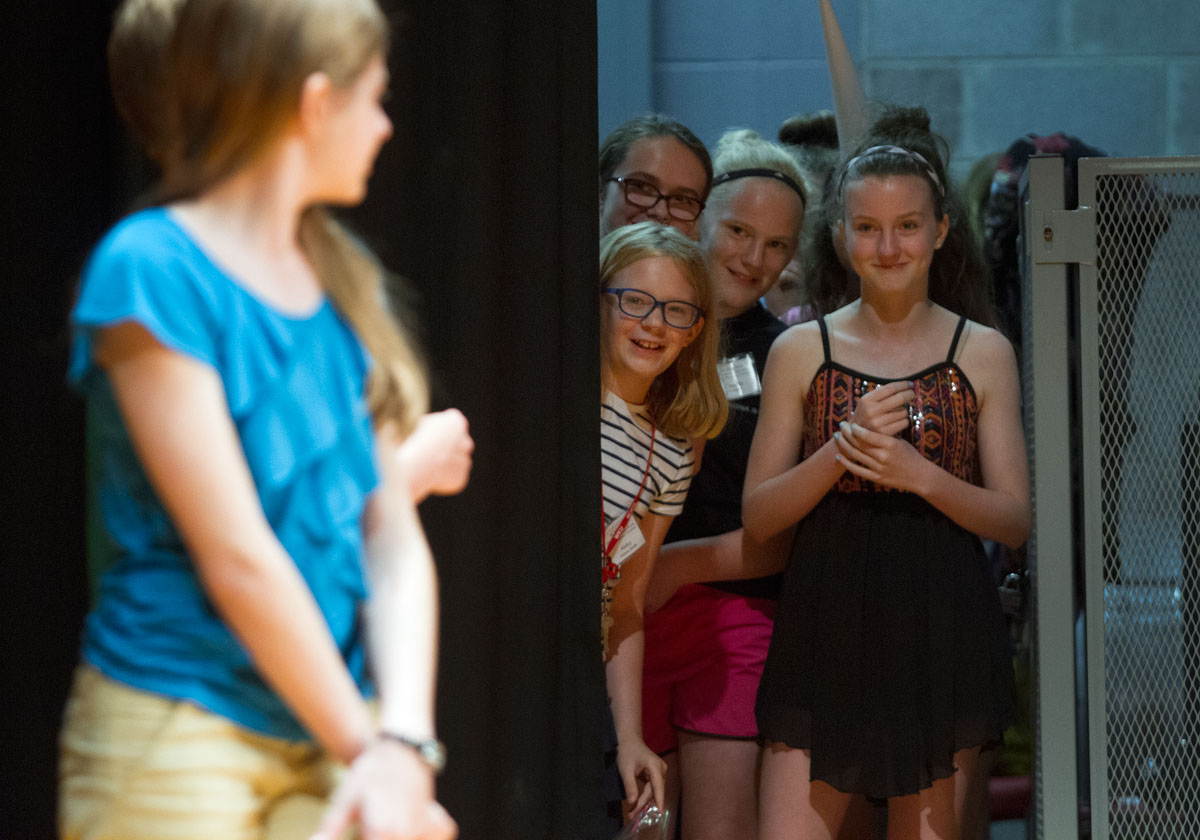 Abby Adams-Smith (from left) of Bowling Green, Chloe Paddack from Falls of Rough, Cassidy Burnside of Vallonia, Ind., and Emma North of Owensboro watch an introduction presented by the emcees before their group’s performance in the SCATS Talent Show Wednesday, June 17. 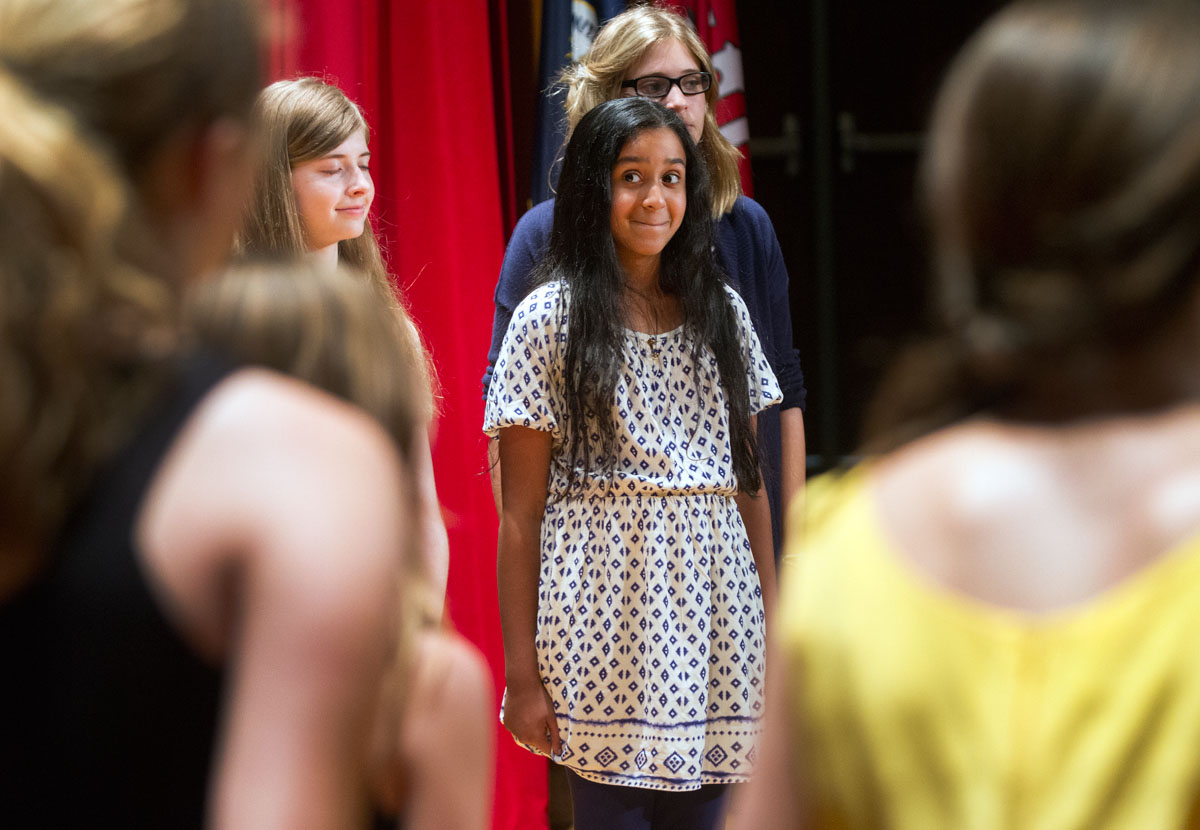 Shruit Gautam of Bowling Green wait for the right moment to start singing during the Musical Troupe performance after the SCATS Banquet Thursday, June 18.

Anya Hartman of Lexington (center) laughs while rehearsing a scene in “Fairy Tale News” Tuesday, June 16 in Acting. Anya is attending SCATS for the second year, and her mother is an alumnus of The Center for Gifted Studies’ summer programming as well. 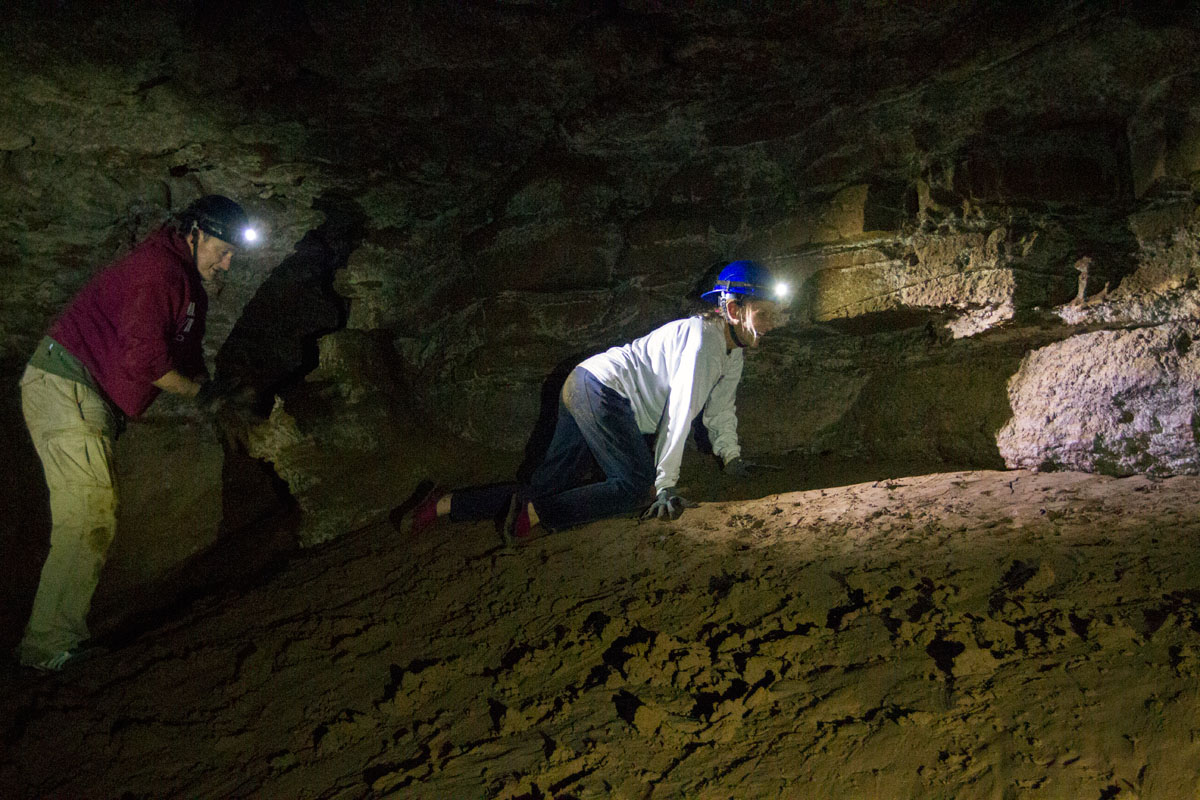