In 2002, Jim Justice coached his daughter’s basketball team to the West Virginia State tournament for the first time. Over the next four years, the team would keep going back, sometimes making it into the championship game, but never winning it all.

In the five years since the team’s last State appearance, the girls who once sat in elementary schools watching their predecessors play in these tournaments, have grown up and become the Lady Spartans. In that same time, their coach Justice, 59, has purchased the Greenbrier Resort, adding to his portfolio of over 40 businesses, and has been referred to as one of the richest men in America; and the team has earned its way back to the tournament.

In the week leading up to State, the girls balanced their time between practicing basketball, meeting with younger students through a series of pep rallies and bonding as a team.

Wednesday morning, the school and the community rallied behind the team who they followed the next day in 19 buses to Charleston to watch the Lady Spartans play their first game. It would only take one game for the Spartans to be knocked out of the tournament, losing 73 to 55 against Bridgeport High School. 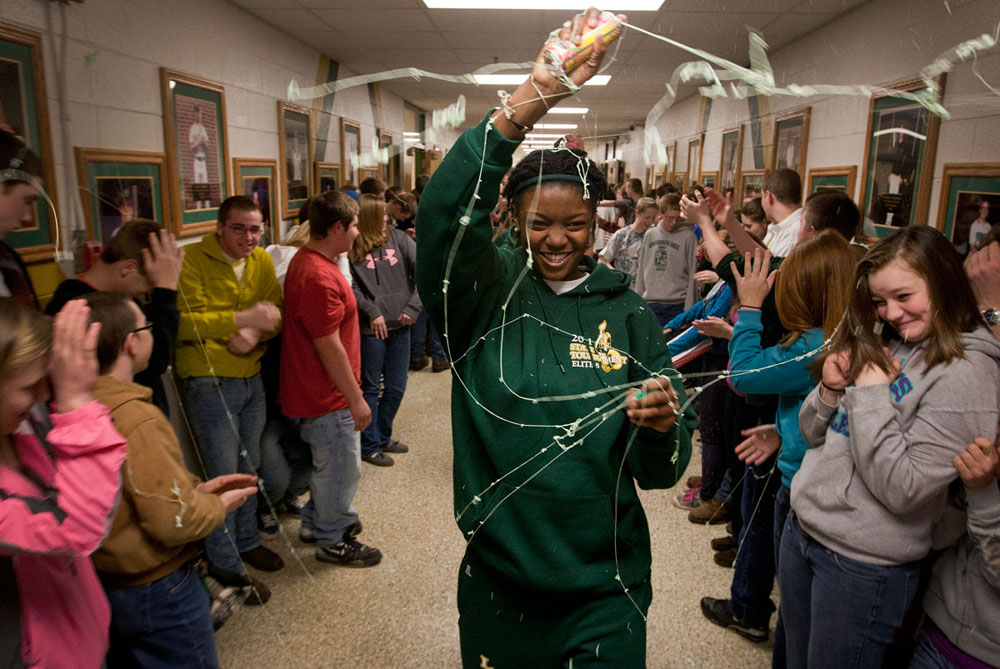 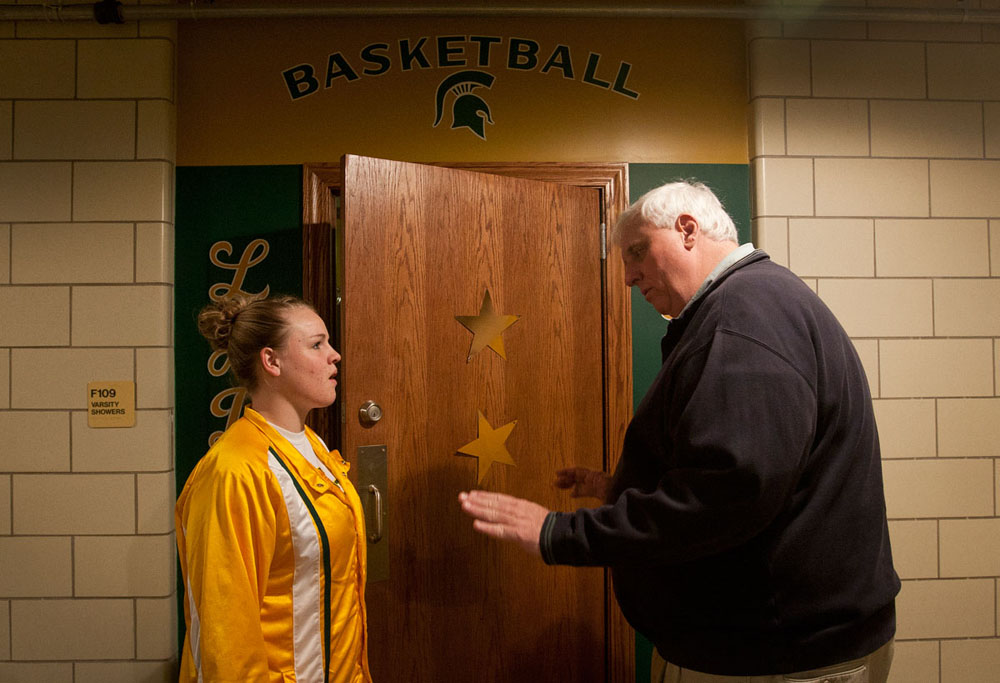 Outside the locker room he paid to remodel, Head Coach Jim Justice calms sophomore Maddee Carroll before a state-sendoff pep rally Wednesday at Greenbrier East High School. Justice, 59, owns the Greenbrier Resort and 47 other businesses and began coaching the Lady Spartans when his daughter was on the team. 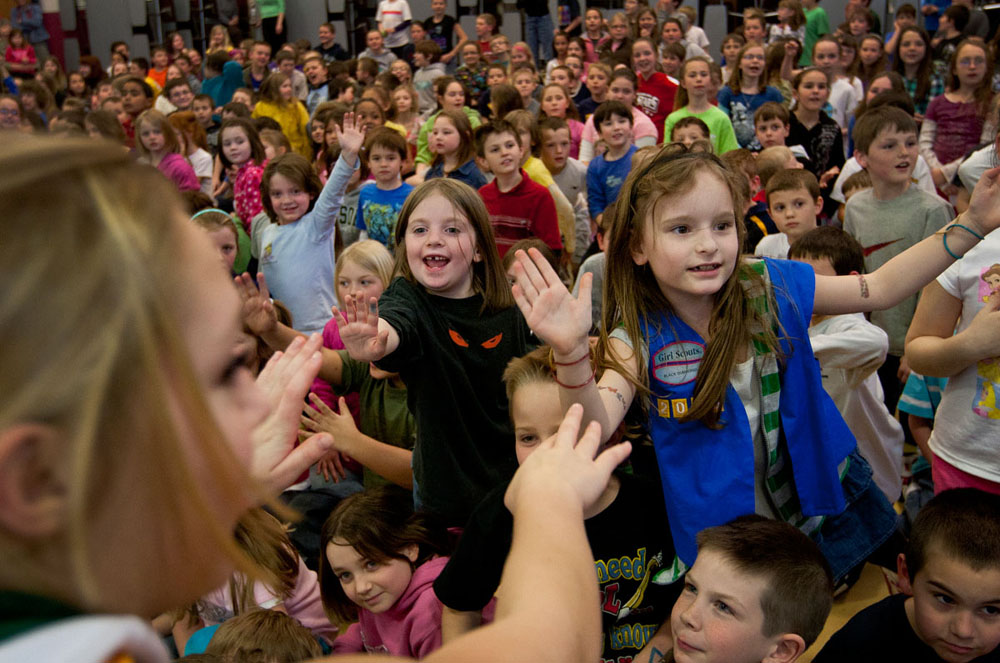 Students at Ronceverte Elementary School reach out to sophomore Cassie Ford hoping to be picked to shoot a free throw during the team’s visit Tuesday afternoon. The elementary students were able to shoot free throws, play against the team and ask the team questions. 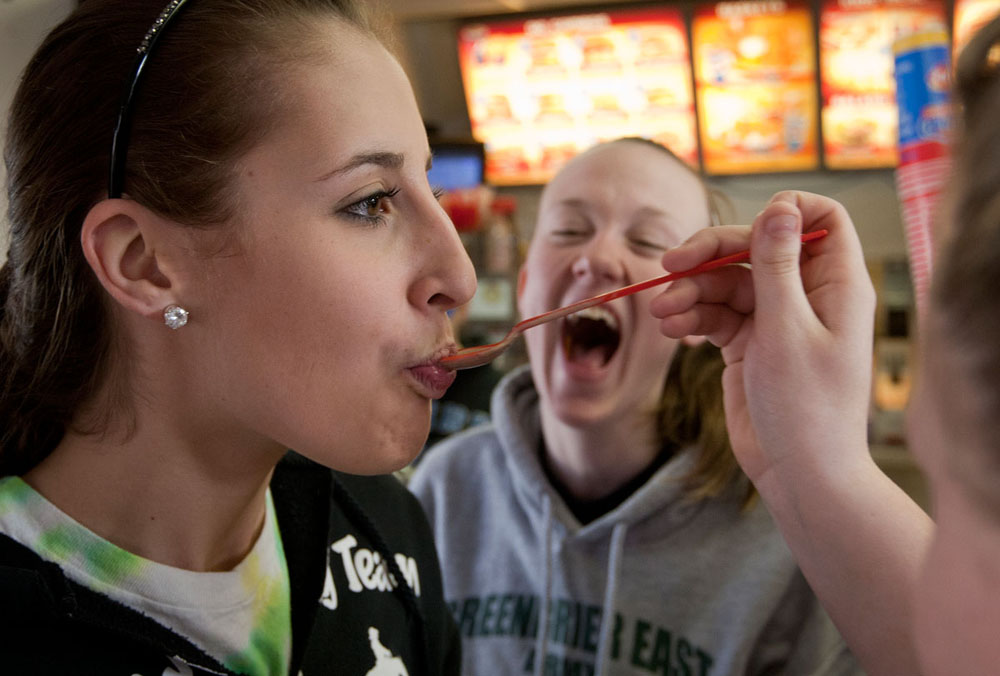 After convincing their coaches to stop at Dairy Queen, Senior Kayla Whited eats a bite of a Blizzard served to her by sophomore Maddee Carroll while senior Katie Abell watches following an elementary school visit Tuesday afternoon. 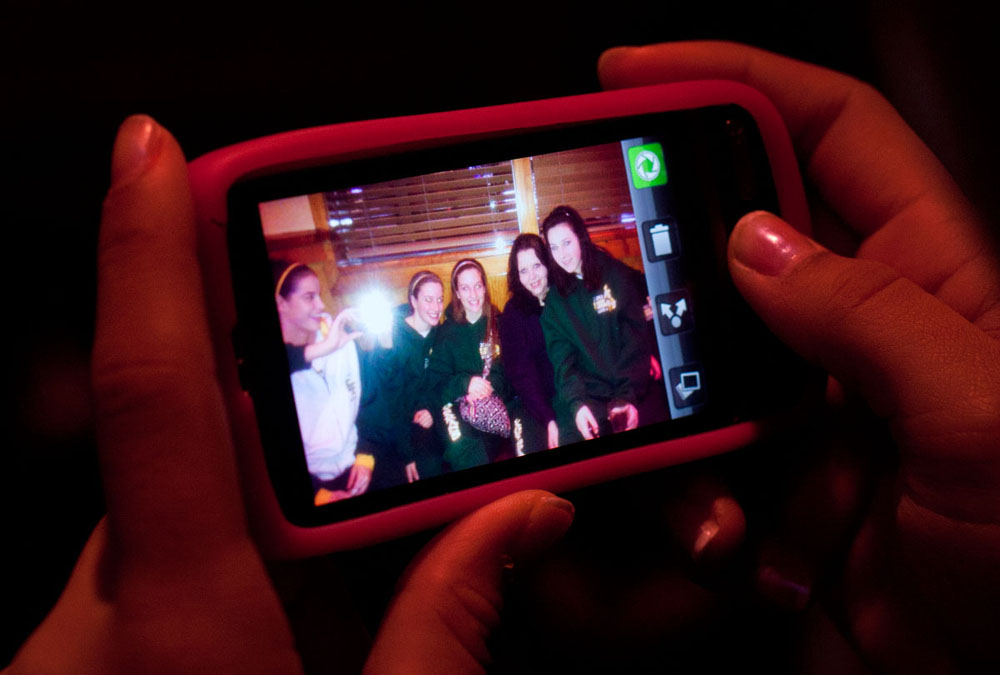 Waiting for a table at Outback Steakhouse in Charleston the night before playing in the state tournament, freshman Chaunte McDowell reviews a picture she took of her teammates. The team often goes out to eat together, especially after winning close games. 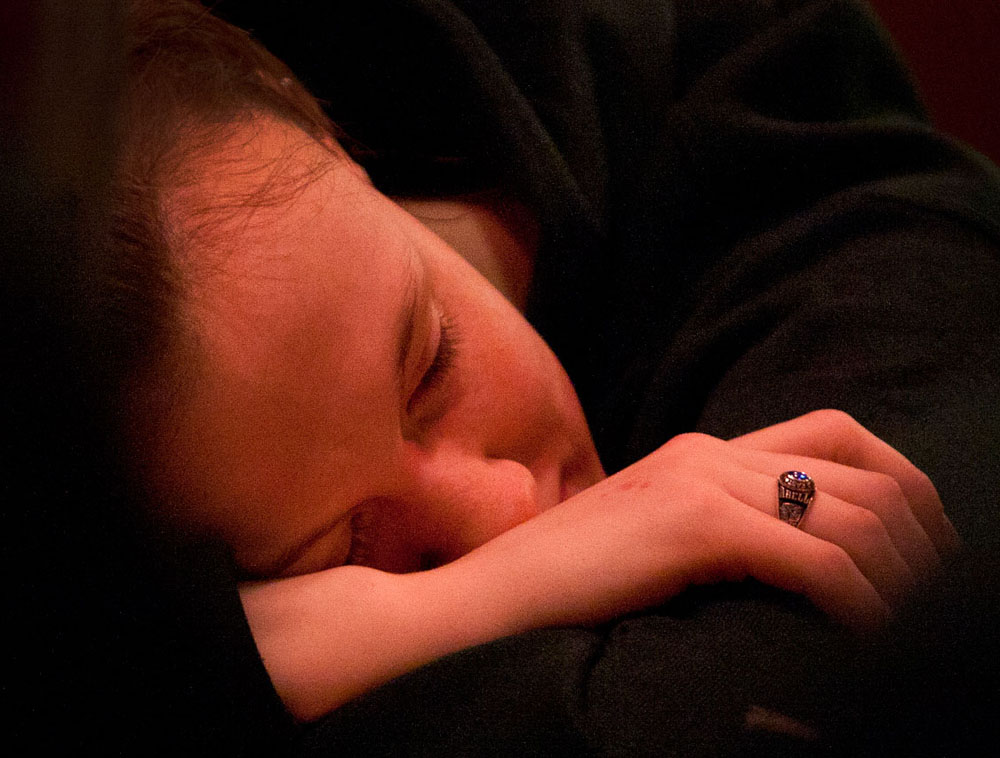 The night before playing at State, senior Katie Abell puts her head down while eating dinner with the rest of her team at Outback Steakhouse. Earlier in the day Katie told some of her teammates that she will be going to Iraq in 2013. A member of the Junior Reserve Officers Training Corps at Greenbrier East High School, she has committed to joining the military to help pay her way through college. 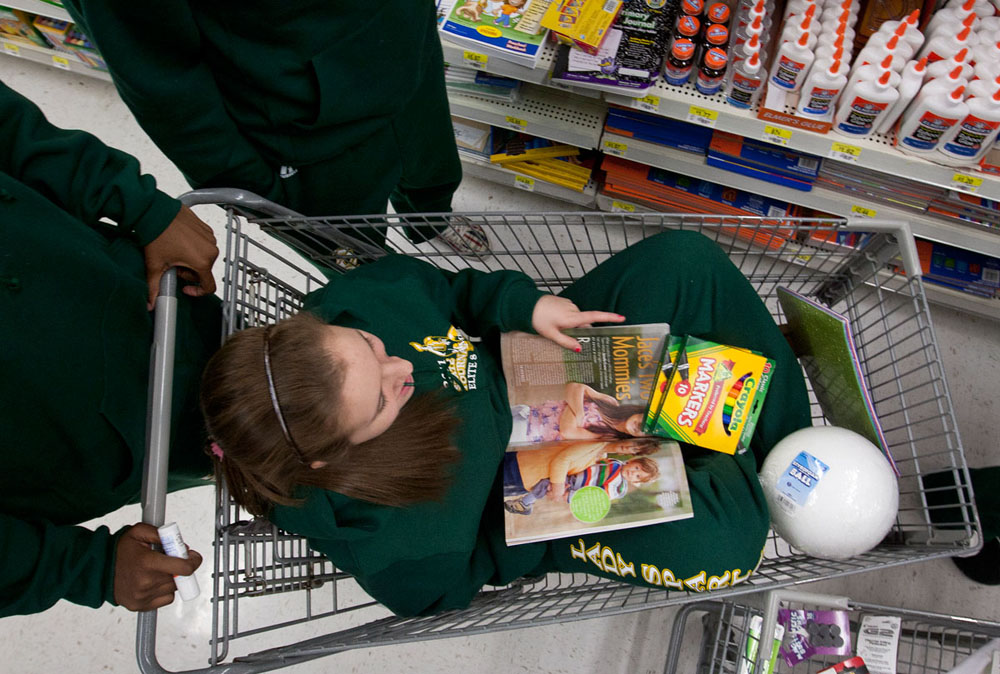 Shopping for supplies to make a banner, freshman Elizabeth Romeo rides in a shopping cart and reads a magazine Tuesday night. After shopping together at Walmart, members of the team went to senior Shay Walker’s house to decorate the banner. 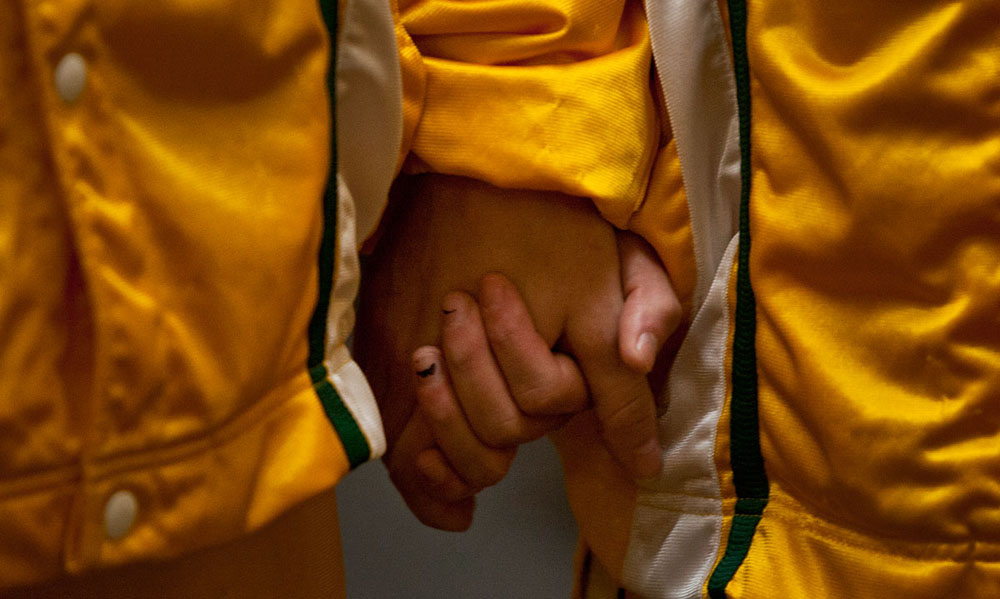 Praying in the locker room before playing in the state tournament, two members of the Lady Spartans hold hands. Senior Brittany Parker leads the team in prayer before every game. 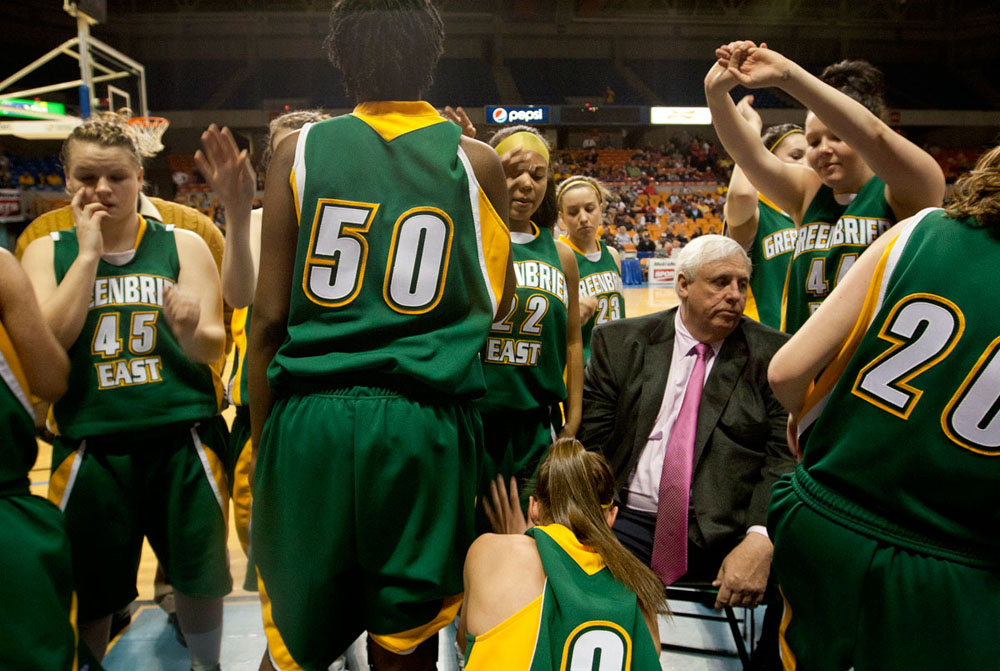 After a timeout during their game against Bridgeport High School, the Lady Spartans leave the huddle in the first half of the game. 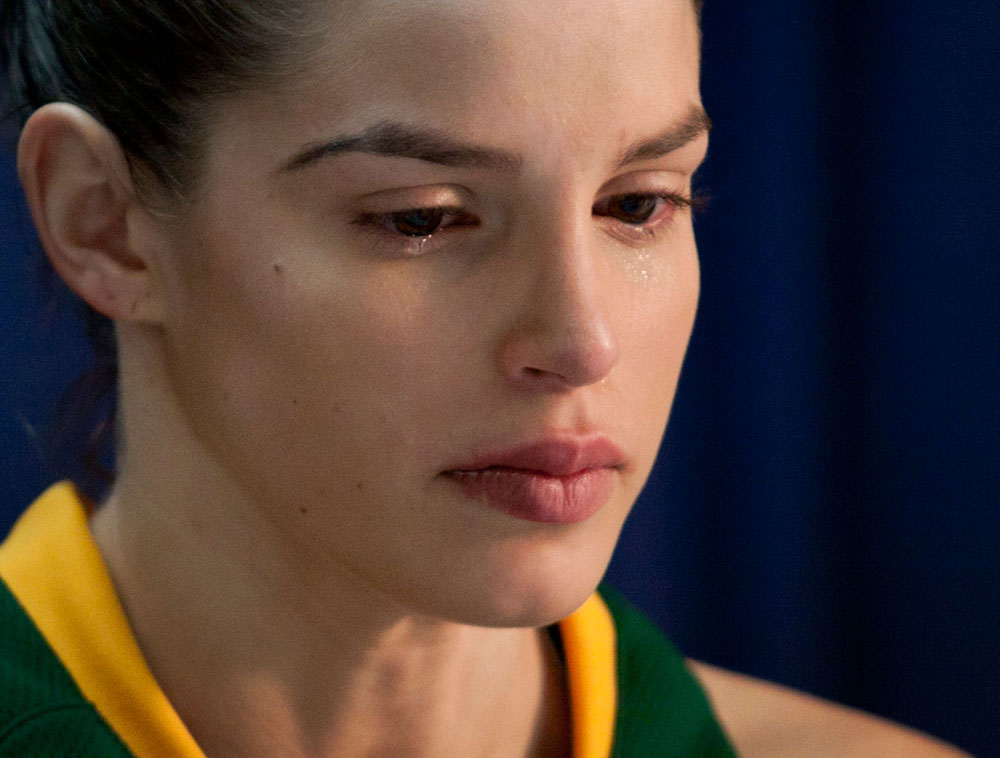 Senior Gaby Dugan sits in a post-game press conference following the team’s 73 to 55 loss to Bridgeport High School, which ended the team’s pursuit of a state championship.