Last week, the Catholic Courier sent me to cover the National Catholic Youth Conference. We had about 550 high school students and chaperones from our diocese among the 23,000 pilgrims from all over the country who converged in Indianapolis for the conference. NCYC provided the youth with opportunities to learn about the faith through keynote speakers, breakout workshops and mingling with men and women from religious orders. I traveled down to Indianapolis from Rochester Wednesday on one of the ten buses from our diocese, then spent Thursday, Friday and Saturday taking pictures and posting daily galleries before getting on the bus back to Rochester right after the closing Mass late Saturday night.

While I was exhausted by the end of the week, the energy and hope of these high school students has stuck with me after NCYC. It was inspiring to be around so many teenagers who are so passionate about being Catholic and practice the faith unabashedly. The moments in Lucas Oil Stadium with 23,000 other Catholics, all of whom were sitting together silently in prayer, had me awestruck.

The most difficult thing about covering NCYC was finding the right people to take pictures of. Since I’m working for a diocesan newspaper, I was only looking for teenagers from our diocese. My approach was to randomly walk around the many workshops and exhibits hoping to run into some of them. In hindsight, that sounds a lot like looking for a needle in a haystack. However, it worked out alright. I ended up with some pictures I liked as well as a lot of exercise from walking— the pedometer app on my phone says that I took over 20,000 steps on Saturday alone!

Here are some of my favorite pictures from the trip: 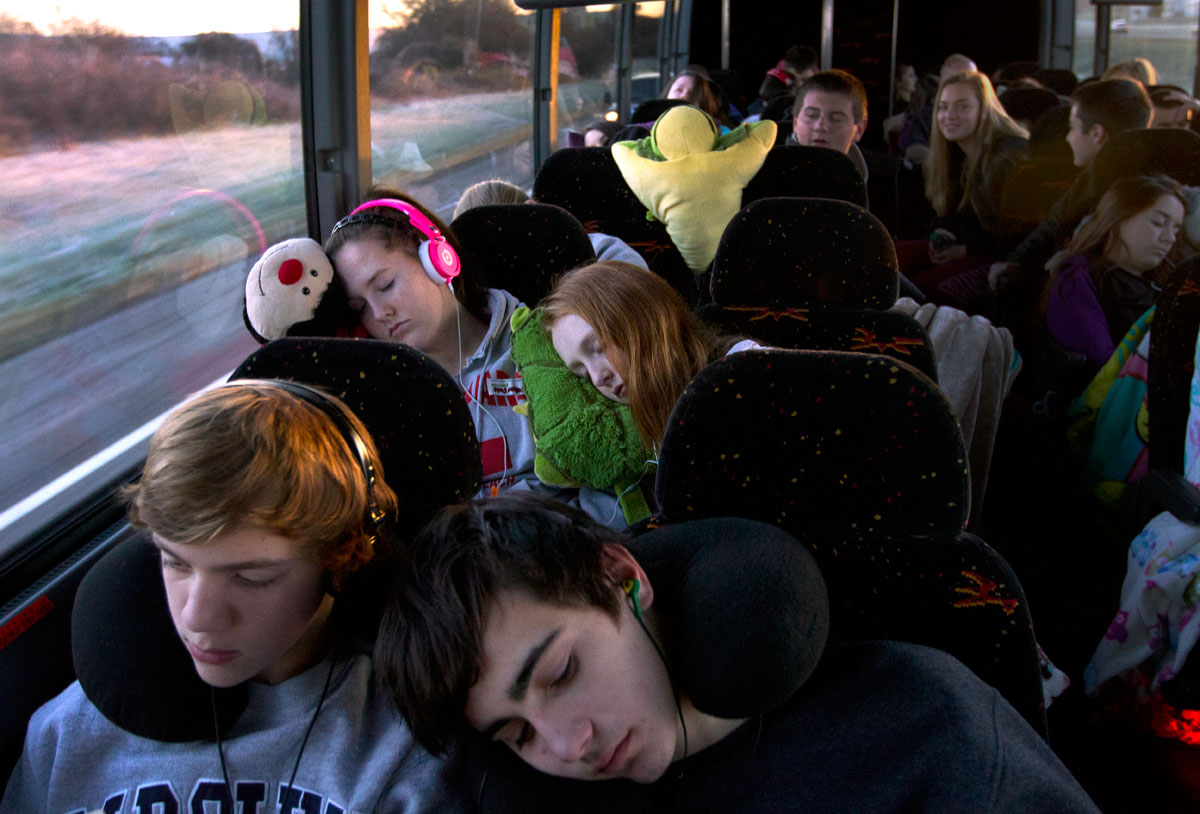 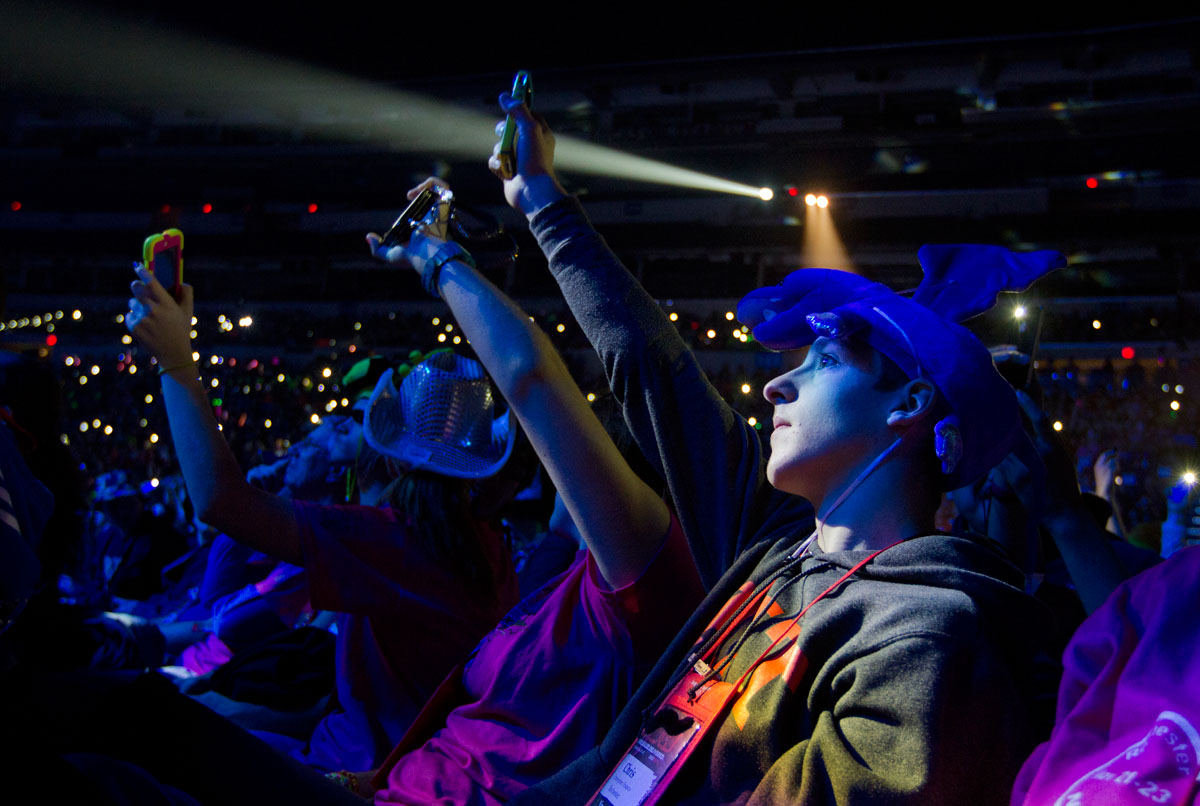 Chris Franco waves his cell phone in the air to give off light as the crowd was encouraged to do by Israel Houghton, the first musician to perform during the opening ceremony of the National Catholic Youth Conference Nov. 21 at Lucas Oil Stadium in Indianapolis. 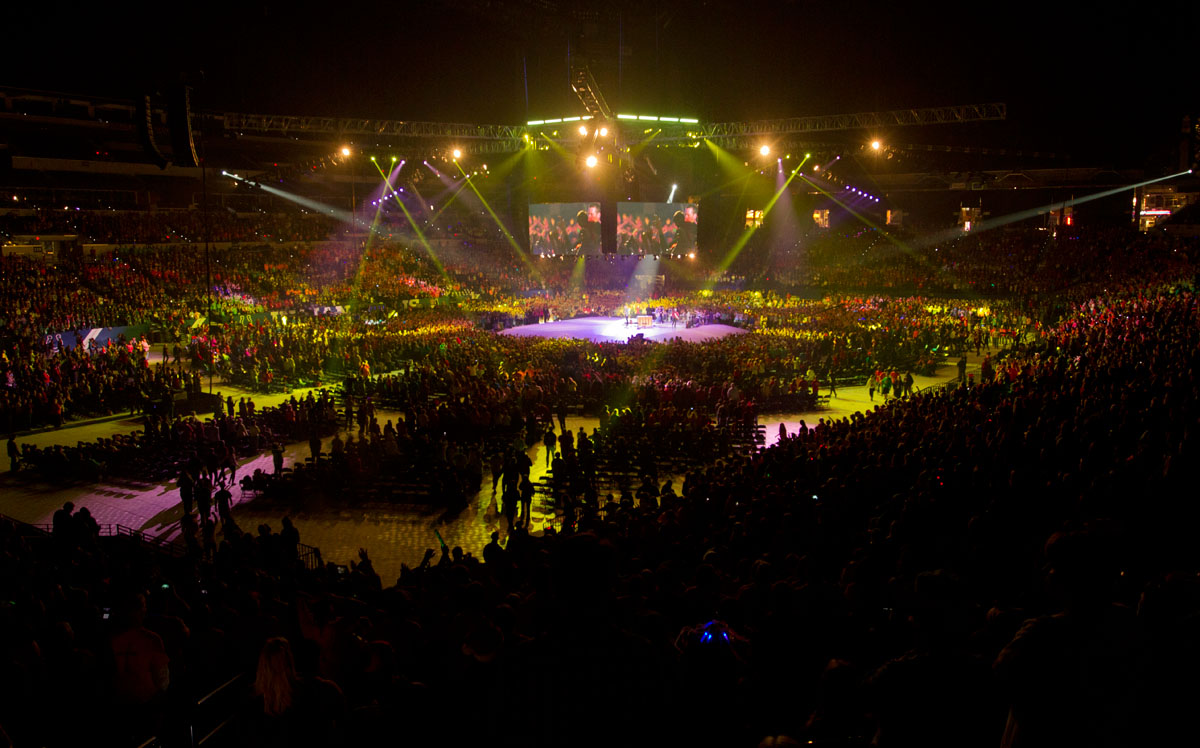 Matt Maher performs for about 23,000 youth and adult pilgrims during the opening ceremony of the National Catholic Youth Conference Nov. 21 at Lucas Oil Stadium in Indianapolis. 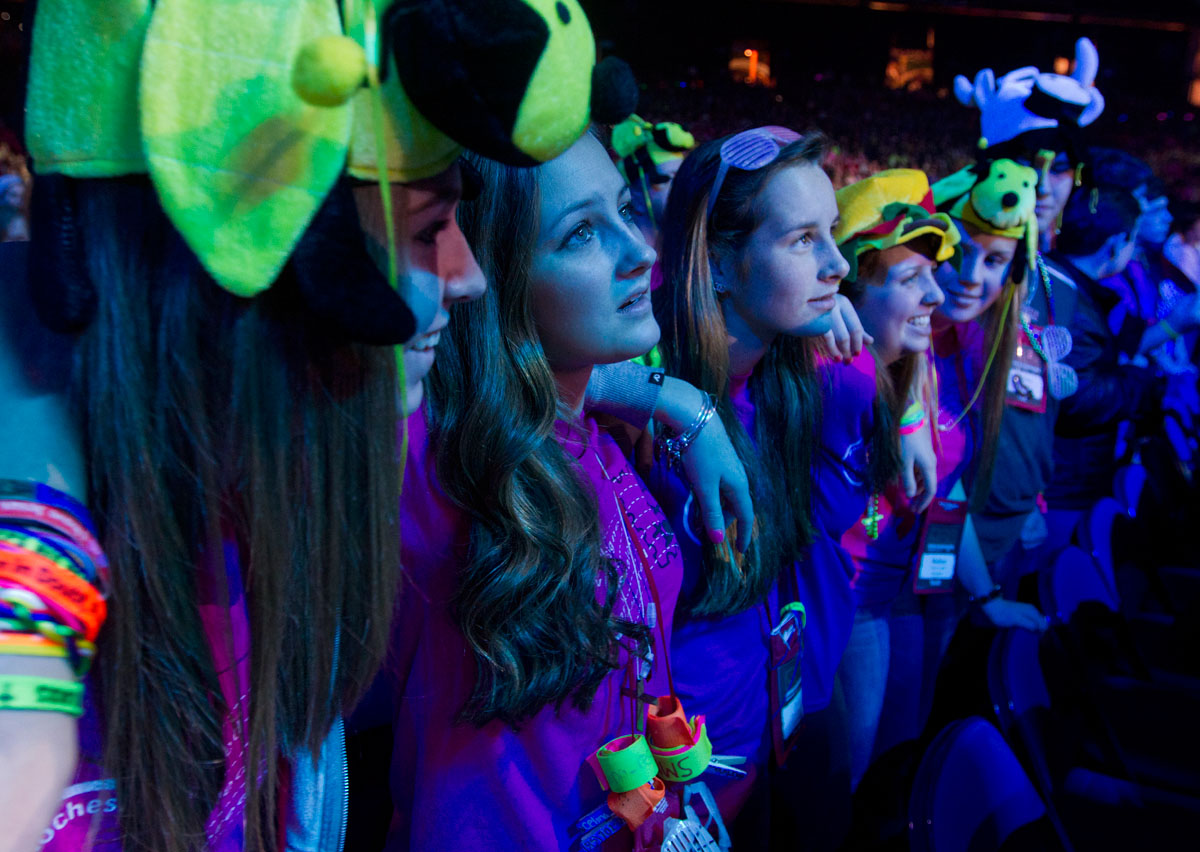 (left to right) Jenna Brooks, Celina Rescott, Judy Rescott, Maggie Flurschutz and Mallory Colella dance and sing-along to “By the Love of God,” the 2013 theme song for the National Catholic Youth Conference at the end of NCYC’s opening ceremony Nov. 21 at Lucas Oil Stadium in Indianapolis. 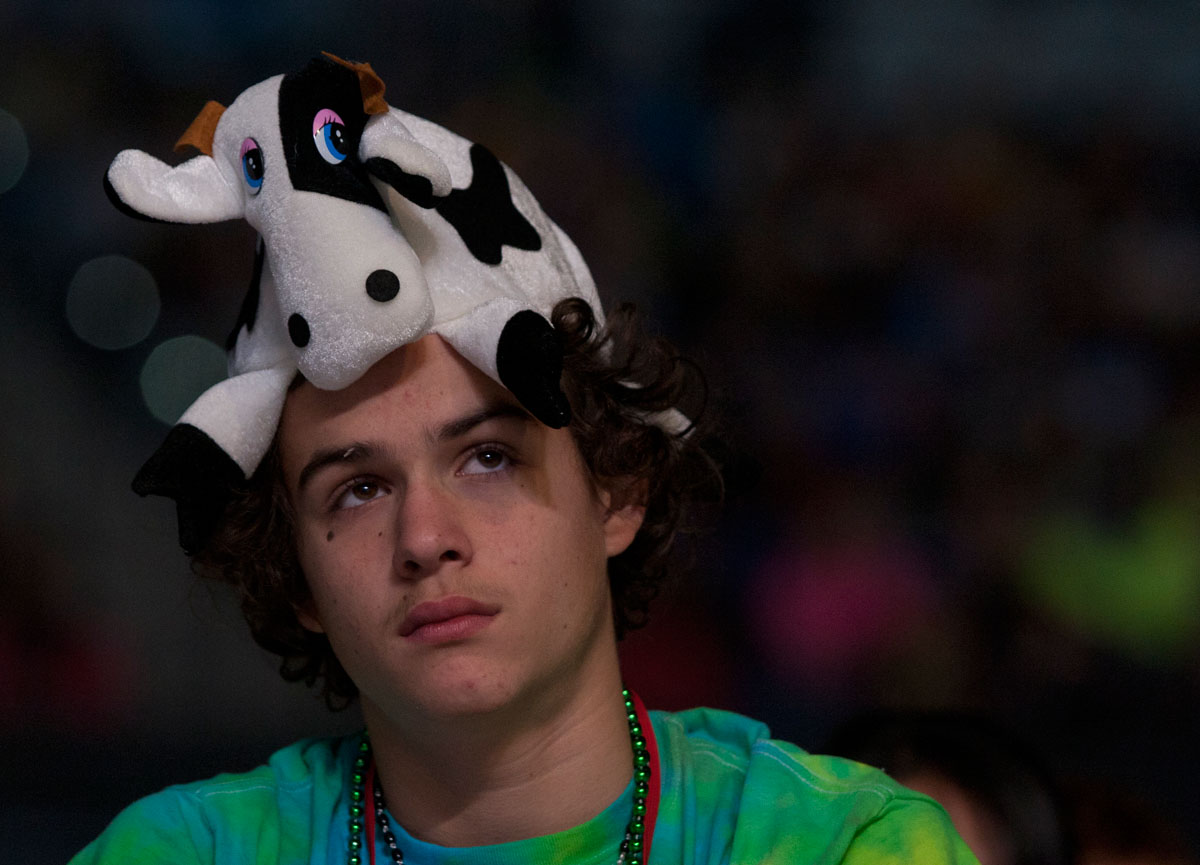 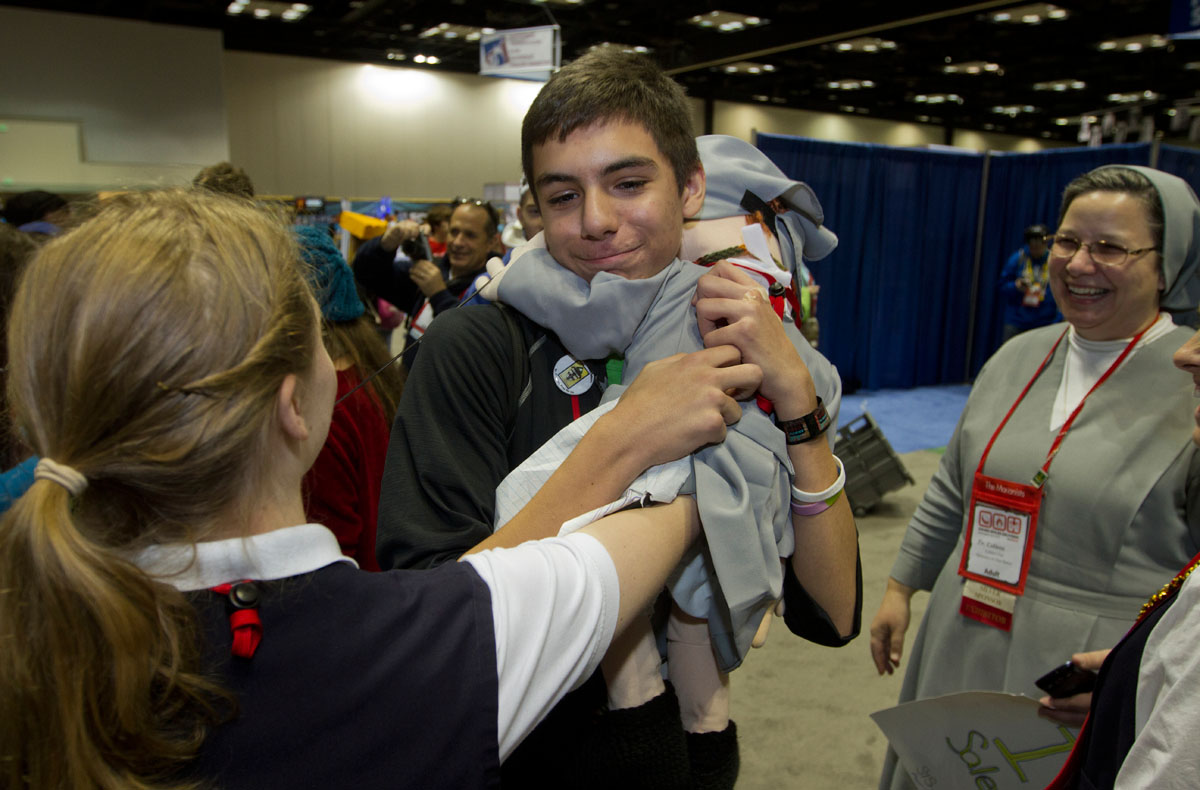 Tyler Ray, 14, from St. Rita Church in Webster hugs Sister Marianette before hugging her handler, Sister Kelly Schuster, who is based out of New Jersey with the Salesians of Don Bosco. Ray was walking around NCYC with a sign that read “Free Hugs.” 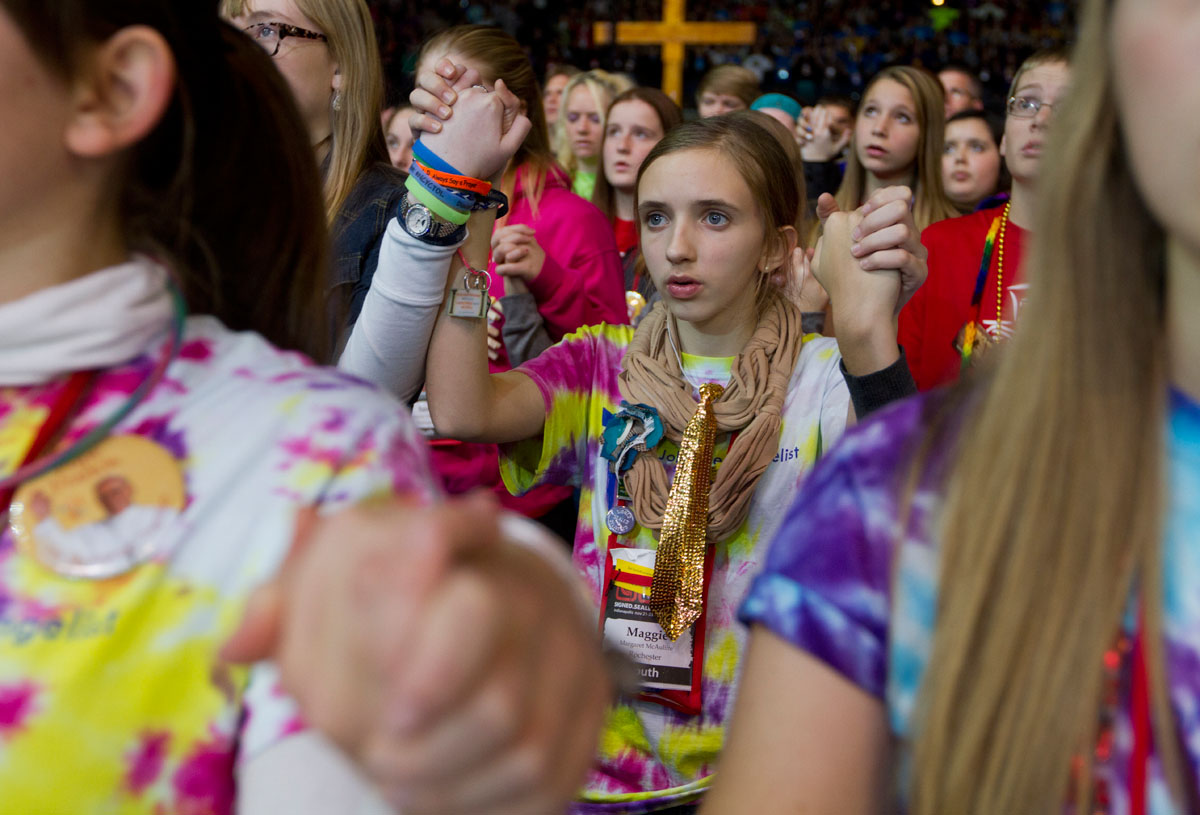 Maggie McAuliffe holds hands with other pilgrims from St. John the Evangelist in Spencerport while saying the Our Father during the closing Mass Saturday. 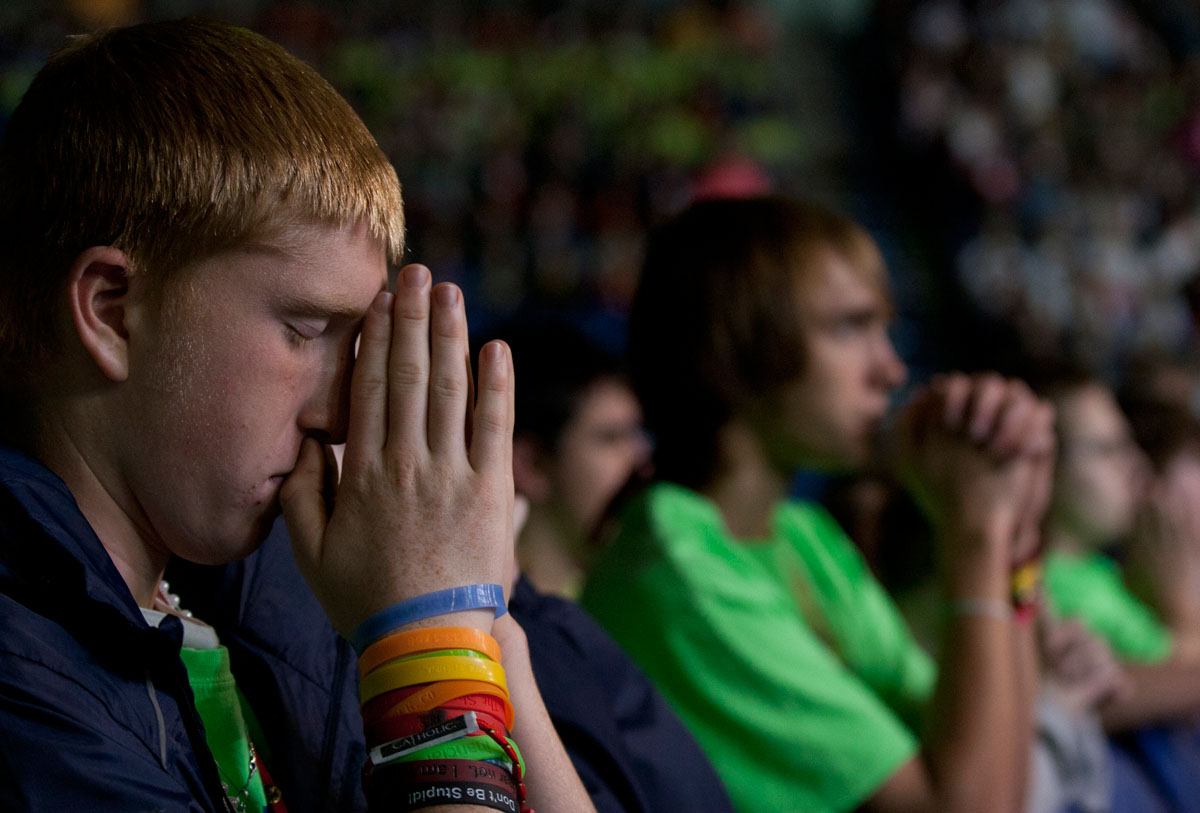 Pilgrims rush the stage after the closing Mass Saturday.