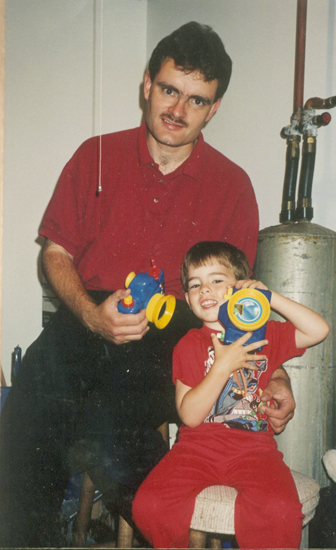 Sam with his dad, Mike

Sam Oldenburg is thrilled to be living in the time of a journalism renaissance. A native of Owatonna, Minnesota, Sam studied photojournalism at Western Kentucky University, where he had the opportunity to develop his journalistic skills across multiple mediums while keeping the core of quality storytelling at the heart of his work. Sam has had experience in photography, writing, audio gathering, multimedia production and digital design.

Cameras have always been prevalent in Sam’s life. His father worked as a newspaper photographer before opening a portrait studio several years after Sam’s birth. Sam often, willingly or not, became the test subject whenever his dad had a new idea. Photography became a larger part of Sam’s life while he was in high school and worked on his school’s newspaper and yearbook. His experiences in high school led him to pursue an education at Western Kentucky University and a career in photojournalism.

After graduating from WKU, Sam worked at the Catholic Courier, a monthly newspaper with a circulation of more than 100,000 that covered a 12-county region of western New York. He currently works at WKU in The Center for Gifted Studies where his responsibilities range from photographing a plethora of summer camps and other programs to chaperoning students on whirlwind field trips and representing The Center at events around Kentucky as well as around the world. His role is to get the best stories about The Center’s constituents in front of the right people at the right time.

Sam has produced stories in places ranging from a monastery in Indiana to massive wilderness reserves in South Africa. However, what he enjoys most is working with a team of journalists to set and carry out a vision for a publication.